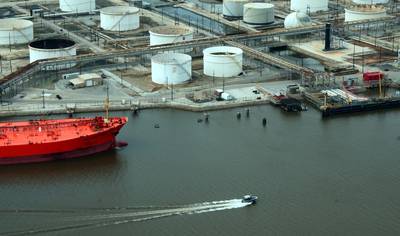 Oil and gas exports from the United States have been severely disrupted by Hurricane Laura, with nearly a million barrels per day (bpd) of crude exports likely reduced this week by closures of U.S. Gulf Coast terminals and disruptions at ports.

The hurricane also temporarily suspended operations at several liquefied natural gas (LNG) facilities in the world’s third largest exporter of the super-cooled gas, with shipments on track to fall to their lowest in 18 months.

Laura made landfall early Thursday near the Texas-Louisiana border, one of the most powerful storms to ever hit the region, and raced north.

Ports of Lake Charles, Beaumont and Port Arthur remained closed on Thursday, according to the U.S. Coast Guard.

The Port of Houston, which is the top U.S. crude oil export hub accounting for about 600,000 bpd of shipments, closed on Wednesday and was in the process of reopening to commercial shipping late Thursday, according to the Coast Guard.

Some 50 vessels, most of them tankers, were at anchorage offshore and waiting the re-enter the Houston Shipping Channel, said JJ Plunkett, port agent for the Houston Pilots Association, which guides vessel in and out of the ship channel.

The closures of Houston Port, Beaumont and Port Arthur were expected to reduce seaborne crude export capacity by nearly 1 million bpd, data intelligence firm Kpler estimated, based on average figures over the past four months.

U.S. crude exports averaged about 2.9 million bpd in the last four weeks, according to data from the U.S. Energy Information Administration.

The closure of those ports would also reduce a total of about 830,000 bpd in refined product departures, Kpler said.

The Louisiana Offshore Oil Port (LOOP), the largest privately-owned crude terminal in the United States, also suspended operations at its marine terminal on Sunday ahead of the storm.

The extent of disruption would depend on any damage inflicted on export and production facilities. Energy companies were gearing up to survey the storm's impact on Thursday.

Loadings of LNG cargoes from the United States have also been delayed.

LNG exports were on track to fall to 2.1 billion cubic feet per day (bcfd) on Thursday, their lowest since February 2019, according to data from Refinitiv.

Both LNG export plants suspended operations earlier this week and said they would conduct damage assessments as soon as it was safe to do so.

"Even though the LNG terminals are able to withstand hurricane winds of up to Category 5, the main concern is the impact of (any) storm surge in the surrounding area which will threaten the resumption of port activities," Rebecca Chia at Kpler said.

Imports are also likely to be affected with the major ports closed. Kpler estimated a drop to nil from levels near 750,000 bpd, with the closures of Houston Port, Beaumont and Port Arthur.