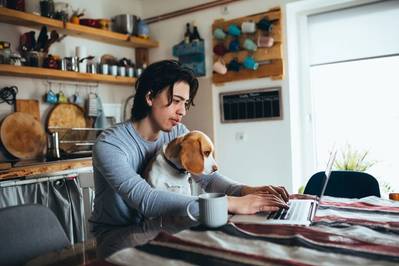 SINGAPORE, March 24 -- From banks of screens and giant phones in the office, energy traders worldwide are adapting to a laptop in the bedroom -- and it's going surprisingly well.

Working from home has become the new norm in the oil trading hubs of Singapore, London and New York as governments encourage physical distancing to curb the spread of coronavirus.

While some energy companies have long had facilities in place to allow off-site access to trading platforms and other technology, others are rapidly installing key equipment and communication systems for the bulk of their trading teams.

"Working from home, having a conference call with kids and dogs in the background has become the new norm," said one Singapore-based LNG trader.

However, a dozen traders canvassed by Reuters reported few major problems once the right equipment had been secured - apart from increased snacking - with slower internal communications and a lack of face-to-face time with colleagues the main complaints.

"You actually end up working longer hours from home. Every activity that involves multiple people slows down," said a second trader, referring to communication with other teams such as shipping and credit departments.

Royal Dutch Shell, one of the first energy companies in Singapore to send staff home after discovering an employee had been in contact with a coronavirus carrier, has teams working on rotation to prevent large groups congregating at its main office, said Leong Wei Hung, president of Shell International Eastern Trading Co.

Apart from using audio and some video conferencing to facilitate discussions, Shell is also making sure its staff feel engaged while working remotely.

"A practice my teams and I have adopted is to have short check-in calls with various team members. Simply asking if they are well, is there anything they need help with, making sure no one feels alone or isolated," Leong said.

Energy major BP has set up a "split-team" trading model where a small number of essential staff in both London and Singapore alternate between one week in the office and one week at home, with only limited contact between teams.

Global trading firm Vitol said it has long had technology for working from home and this is now being put to use.

"The current situation requires a little more effort, but everyone is working hard to make sure communications remain effective," a company spokeswoman said.

All three firms said they were working to ensure compliance controls remain in place.

New Application Boom
The move to home working has helped speed up the adoption of browser-based communication applications such as Speakerbus' ARIA and New York-based Cloud9 Technologies' Cloud9 system, which replace traders' traditional phones, known as turrets, that give access to key contacts at the push of a button and record the conversation.

"The interest has gone up exponentially. Requests are coming in globally," Wodhams said.

"Firms are realising they have a locale risk where if just one or two of their traders test positive for the coronavirus, all of a sudden they can't go into the office anymore," Miller said.

Both systems use cloud-based technologies that give traders the ability to communicate with other companies in a secure and compliant way, without having to lug home the bulky turret.

"(The energy) industry is a very face-to-face personal relationship industry, so travel restrictions are a big dampener," said one trader.