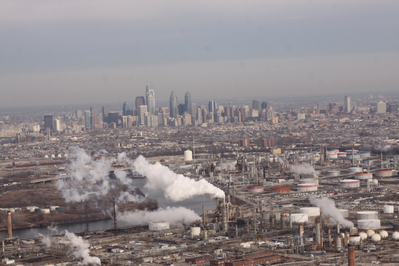 U.S. President Donald Trump has called a meeting early next week with key senators and Cabinet officials to discuss potential changes to biofuels policy, which is coming under increasing pressure after a Pennsylvania refiner blamed the regulation for its bankruptcy, according to four sources familiar with the matter.
The meeting comes as the oil industry and corn lobby – powerful forces in Washington – clash over the future of the Renewable Fuel Standard (RFS), a decade-old regulation that requires refiners to cover the cost of mixing biofuels such as corn-based ethanol into their fuel.
Trump's engagement reflects the high political stakes of protecting jobs in a key electoral state. Oil refiner Philadelphia Energy Solutions (PES), which employs more than a thousand people in Philadelphia, declared bankruptcy last month and blamed the regulation for its demise.
The meeting, scheduled for Tuesday, will include Republican Senators Ted Cruz of Texas, Chuck Grassley and Joni Ernst of Iowa, along with Environmental Protection Agency Administrator Scott Pruitt, Agriculture Secretary Sonny Perdue, and potentially Energy Secretary Rick Perry, according to the four sources, who asked not to be named because they were not authorized to speak publicly on the matter.
One source said the meeting would focus on short-term solutions to help PES continue operating. PES is asking a bankruptcy judge to shed roughly $350 million of its current RFS compliance costs, owed to the EPA which administers the program, as part of its restructuring package.
The other sources said the meeting will consider whether to cap prices for biofuel credits called RINs, let higher-ethanol blends be sold all year, and efforts to get speculators out of the market.
Prices for ethanol RIN credits were trading at 62 cents each on Friday morning, down from 66 cents each on Thursday, according to traders.
Officials at the EPA, Agriculture Department, and Energy Department declined to comment. A White House official, Kelly Love, said she had no announcement on the matter at this time.
The offices of Cruz, Ernst and Grassley did not immediately return requests for comment.
The sources said the options moving forward would be constrained by political and legal realities that have derailed previous efforts at reform.
The Trump administration has already considered changes to the RFS sought by refiners this year - including reducing the amount of biofuels required to be blended annually under the regulation, or shifting the responsibility for blending to supply terminals - only to retreat in the face of opposition from corn-state lawmakers.
Narrow Options, Board Resistance
The EPA is expected to weigh in officially in the coming weeks on PES's request to the bankruptcy judge to be released from its compliance obligations. But any such move would likely draw a backlash from other U.S. refiners, who have no hope of receiving a waiver.
Under the RFS, refiners must earn or purchase blending credits to prove they are complying with the regulation. As biofuels volumes quotas have increased, so have prices for the credits - meaning refiners that invested in blending facilities have benefited while those that have not, such as PES, have had to pay up.
PES said its RFS compliance costs exceeded its payroll last year, and ranked only behind the cost of purchasing crude oil.
Other issues may have contributed to PES's financial difficulties. Reuters reported that PES's investor backers withdrew from the company more than $594 million in a series of dividend-style distributions since 2012, even as regional refining economics slumped.
Regulators and lawmakers have been considering how to cut the cost of the RFS to the oil industry.
In recent months, for example, the EPA has contemplated expanding its use of an exemption available to small refineries - a move that would likely push down RIN prices, but which both the oil and corn industries have said would be unfair.
Cruz last year proposed limiting the price of RINs to 10 cents, a fraction of their current value – an idea that was roundly rejected by the ethanol industry as a disincentive for new ethanol blending infrastructure investment.
Senator John Cornyn, also a Texas Republican, is preparing draft legislation to overhaul the RFS in Congress that would include the creation of a new specialized RIN credit intended to push down prices - but it too faces resistance from both the corn and oil lobbies.
Reporting By Jarrett Renshaw
Email