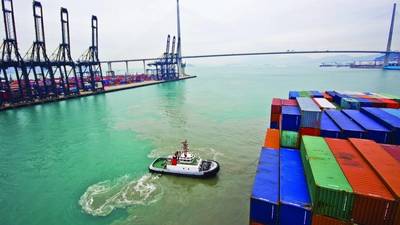 SEA\LNG, the multi-sector industry coalition aiming to accelerate the widespread adoption of liquefied natural gas (LNG) as a marine fuel, strongly supports the decision of the Marine Environment Protection Committee (MEPC) to reaffirm the January 1, 2020 implementation date of the 0.50% sulphur fuel limit.

SEA\LNG said in a press release that it also applauds the adoption of the amendment to MARPOL Annex VI for a carriage ban on non-compliant fuels for vessels without an approved equivalent arrangement to meet the sulphur limit – such as an exhaust gas cleaning system (EGCS) on March 1, 2020.

SEA\LNG also highlighted the central role of LNG, not only in complying with the 2020 global sulphur cap, but for its potential to help achieve the IMO’s target for a 40% reduction in carbon intensity by 2030 – a sentiment supported by major flag states and ship owner organisations at MEPC 73 – and total emissions by at least 50% by 2050.

LNG far outperforms conventional marine fuels in terms of minimising harmful air emissions and can significantly reduce GHG emissions. LNG emits zero sulphur oxides (SOx) and virtually zero particulate matter (PM). Compared to existing heavy marine fuel oils, LNG emits 90% less nitrogen oxides (NOx).  The importance of improving air quality from a public health standpoint is clear and LNG’s performance in this regard is unrivalled.  Through the use of best practices and appropriate technologies to minimise methane leakage, realistic reductions of GHG by 10-20% compared with conventional fuels can be achieved.

Keller said: “Improvements in marine propulsion systems continue to advance apace, with today’s engines already significantly ahead of previous years’ technologies.  It is expected that these improvements will continue as OEMs concentrate on accelerating emissions performance. In combination with efficiency measures being developed for new ships in response to the IMO’s Energy Efficiency Design Index (EEDI), LNG provides a viable and effective means of achieving the IMO’s target for a 40% reduction in carbon intensity by 2030, as well as longer term goals.”

LNG provides the shipping industry with the opportunity for a safe and scalable fuel to meet global marine energy demands. Bulk supply infrastructure for LNG already exists along the main shipping lanes today and LNG bunkering capacity is growing rapidly with at least 23 bunker vessels expected to be in service by 2020.

“Meeting the ambitious emissions targets set by the IMO requires unified action from the entire shipping industry, including ship owners, the supply chain, scientists, engineers and analysts,” concluded Keller. “Academic studies and other discussions that criticise the effectiveness of proven alternative fuelling solutions such as LNG, but stop short of offering realistic alternatives, will only detract from genuine efforts to reach the IMO’s goals.”