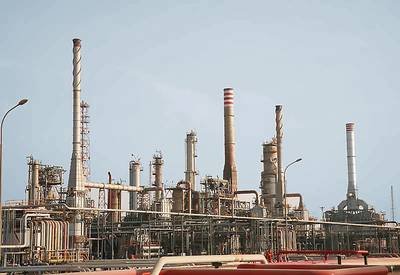 OPEC appears to be reformulating its target in terms of upstream investment rather than oil inventories, according to an analysis of recent statements made by ministers from member countries.
“There is no such thing as a target price by Saudi Arabia,” the kingdom’s energy minister, Khalid al-Falih, told reporters on Wednesday (“Saudi Arabia happy with oil market, won’t let another glut form”, Reuters, April 11).
“We’re seeing (production in) many regions declining. The only way to offset this is for the financial markets to start financing and funding upstream projects,” Falih observed.
“I don’t know what is the price that will provide that equilibrium. All we know is in 2018 we’re still not seeing that.”
Falih’s comments suggest the kingdom is now targeting a sustainable level of exploration and production – and prices will have to rise further to incentivise it.
The new weight attached to sustainable investment echoes comments made by other ministers from the Organization of the Petroleum Exporting Countries in recent weeks.
“We will know we have a good price when the market is balanced and we have enough investments. We need to have more investments coming”, the UAE energy minister said on April 11 ("UAE says producers trying to define structure for long-term alliance", Reuters, April 11).
“There has been a clear recovery in oil prices. But it has not been met with an increase in investments ... Investment has been very low,” Qatar’s energy minister said on April 5.
“Investors are still cautious and over-conservative. We need to restore investments,” he added ("Qatar says too early to exit OPEC oil cuts as investment still low", Reuters, April 5).
The emphasis on investment stands in marked contrast to the previous focus on reducing oil inventories in the OECD industrialised countries to the five-year average.
“Almost the single metric that we look at is global inventories and of course the most transparent and trustworthy is the OECD inventories,” Falih said as recently as December.
The recent shift from inventories to investment is consistent across multiple ministers, which suggests it is the result of private discussions within OPEC (https://tmsnrt.rs/2GU0ZQL).
SUSTAINABLE INVESTMENT
Focusing on investment is not new for the organisation. The need for prices high enough to support sustainable investment in production has been acknowledged since OPEC was created.
OPEC’s founding statute, approved in 1961, commits the organisation to stabilising prices, securing a steady income for producing countries, and ensuring a fair return on capital to investors in the petroleum industry.
OPEC members have often stated the need for “security of demand” and for prices to be high enough to justify investment in new capacity.
As a practical matter, the overriding target for OPEC members has always been to maximise government revenues from the sale of petroleum.
But the organisation has rarely stated its objective so bluntly and has normally preferred to declare a less controversial intermediate or operational target such as tax rates, sustainable investment, inventories or price stability.
In the early years, OPEC began by focusing on raising royalties and tax rates (1960s), then increasing prices and obtaining equity ownership of oil production (1970s).
By the early 1980s, OPEC members had obtained complete ownership of production on their territories and the focus shifted more explicitly to revenue maximisation.
Since that time, OPEC has alternated regularly between trying to raise prices and trying to protect its market share against rivals.
In the most recent cycle, OPEC focused on maintaining prices above $100 per barrel between 2011 and the middle of 2014.
From mid-2014 to mid-2016, OPEC switched to defending market share against competition from U.S. shale and other producers, and was prepared to allow prices to slump to protect its exports.
Since the end of 2016, OPEC’s priority has reverted to raising prices and it has been willing to sacrifice some market share to attain that goal.
FIVE-YEAR AVERAGE
In the early stages of its current price-protection strategy, OPEC formulated its goal in terms of the need to reduce excess inventories that had built up during the slump.
Higher prices were merely an incidental benefit of cutting stockpiles back towards the five-year average - at least in theory.
In practice, higher prices and revenues have been the main benefit of the strategy, with benchmark Brent prices increasing from $46 to $72 since OPEC announced it would cut production.
Inventories are now close to the five-year average, and have actually fallen below it in terms of forward cover, but OPEC members still appear to want to continue curbing output and raising prices.
So the inventory target has been swapped for an investment objective to justify continued production restraint.
THE OPEC PRICE RATCHET
Saudi officials remain coy about the kingdom’s target for oil prices and the energy minister has flatly denied there is one.
But the kingdom’s comments and supply behaviour suggest it is reasonable to infer that it has an undeclared target of around $80 +/- $5 per barrel (“Saudi Arabia signals ambition for $80 oil price”, Bloomberg, April 10).
Prices around $80 would balance the kingdom’s budget, help pay for the government’s ambitious reform programme, and make it easier to achieve a notional $2 trillion valuation when shares in state oil producer Saudi Aramco are sold.
OPEC’s ambitions for prices have steadily increased from around $60 to $70 and now $80 over the last 18 months, based on comments made by ministers and other senior officials.
The escalation in the organisation’s price target fits a familiar pattern in which the more prices rise, the more OPEC hopes they will increase further.
For OPEC members, the sustainable equilibrium price is almost always at least $10 higher than the current price.
But by chasing higher prices, the organisation risks increasing rival supplies from U.S. shale and other producers as well as slower growth in oil consumption.
OPEC members have said they want to see more investment - but that implies higher output from U.S. shale as well as other non-OPEC sources.
Before prices dropped in June 2014, the problem was too much investment, which had caused excessive supply growth and created the conditions for the slump.

By pushing for higher prices, OPEC may be on the verge of making the same mistake again.