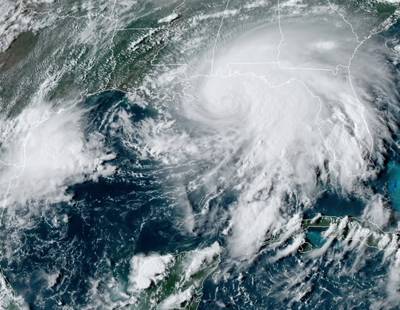 Energy companies, ports and refiners raced on Monday to shut down as Hurricane Sally grew stronger while lumbering toward the central U.S. Gulf Coast, the second significant hurricane to shutter oil and gas activity over the last month.

The hurricane is disrupting oil imports and exports as the nation's sole offshore terminal, the Louisiana Offshore Oil Port (LOOP), stopped loading tanker ships on Sunday, while the port of New Orleans closed on Monday.

Sally was upgraded to a hurricane on Monday, with expected landfall on Tuesday, the U.S. National Hurricane Center (NHC) said, but its trajectory has shifted east toward Mississippi, likely sparing some of Louisiana's refining operations.

Sally's impact could extend beyond the storm's duration, said an industry analyst.

"I don't expect to see damage from wind, but we could see a significant amount of onshore flooding that impacts infrastructure that subsequently impacts Gulf of Mexico production," said Andrew Lipow of Lipow Oil Associates in Houston.

Officials in Mississippi and Louisiana issued mandatory evacuations for residents in low-lying areas.

The Coast Guard shut the ports of Gulfport and Pascagoula, Mississippi, Mobile, Alabama and Pensacola, Florida, at midday.

Refiners in the region wound down operations. The Phillips 66 Alliance oil refinery, which processes 255,600 bpd at a site along the Mississippi River on the coast of Louisiana, shut on Monday, said operator Phillips 66.