The Japanese government is currently in the process of determining areas to be designated as offshore wind power development promotion areas under a new law enacted this fiscal year, for which the government will invite applications and select a wind power plant operator.

The waters off the coast of Sakai City are considered as one of the most promising candidate areas in Japan due to their favorable wind conditions and relatively shallow depth.

With the understanding of local residents and other concerned parties, Sumitomo Corporation and J-POWER will conduct boring surveys, sonic prospecting, and other investigations to determine the soil structure in the area and acquire other data required for designing the wind power plant’s foundation structures.

Sumitomo Corporation embarked on the offshore wind power generation business in 2013 and ever since has built up its expertise in the development and operation of the plants by taking part in various projects in Belgium, the United Kingdom, and France.

In Japan, because large-scale offshore wind power plants are expected to emerge under the new law, Sumitomo Corporation will pursue the possibility of getting involved in such projects by leveraging its expertise accumulated overseas.

Sumitomo Corporation will continue to promote the development of offshore wind power and other renewable energy sources with the aim of contributing to the sustainable growth of communities in harmony with the global environment.

Apart from the investigation currently being conducted with Sumitomo Corporation, J-POWER also has several other similar investigation plans to be implemented in general sea areas where there is a high possibility of building offshore wind power farms.

J-POWER will continue to promote the development of wind power farms that are friendly to the global environment by making use of its expertise and experience accumulated in and outside Japan. 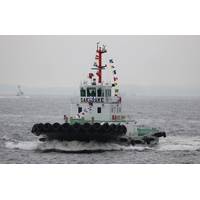