FLNG Production Bows out as US Exports Roil Market 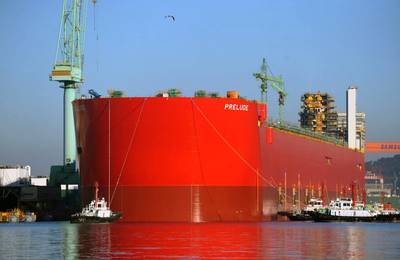 Once considered the future of gas production, floating liquefied natural gas (FLNG) projects have been firmly relegated to the backburner as global gas producers seek cheaper ways to compete with a surge in U.S. shale supplies and slumping prices.
FLNG projects - mega tankers fitted with gas extraction and liquefaction facilities - allow producers to tap offshore gas wells and ship LNG without having to build costly pipelines to onshore plants. Owners can move the vessels to new fields when production at an old one ends, slashing asset end-of-life costs.
The projects were popular with producers in the early-2010s when gas demand and prices were rising, and before the shale revolution unlocked U.S. oil and gas reserves that crushed global energy prices.
But a combination of the massive costs of outfitting a tanker with the necessary equipment - into spaces a fraction of the size of land-based installations - and a collapse in benchmark gas prices has halted interest in adding to the two current projects - Royal Dutch Shell (RYDAF)'s long-delayed $12.6 billion Prelude project off northwest Australia, due to come online in 2018, and Petronas' PFLNG Satu project in Malaysia.
Shell has been a major proponent of FLNG, but spot prices have halved since the major reached its final investment decision (FID) on Prelude in May 2011.
"There was maybe an expectation when Prelude was being conceived that this was the future and every LNG project would look like that," said Shell's executive vice president Steve Hill at a media briefing in Singapore last month.
"I think that got kind of superseded by the U.S. being the primary source of new LNG supply ... Maybe it was the switch from Australia to the U.S. that meant floating (production) didn't kind of take off in the way that was expected."
Woodside Petroleum shelved plans to build the $30 billion Browse FLNG project off western Australia last March because of global oversupply. Partners in the project include Shell, BP, PetroChina (PCCYF), Mitsui & Co and Mitsubishi Corp.
While FLNG remains the project's preferred option, Woodside is pushing to make the case to its partners that bringing gas from Browse and the southeastern Scarborough field into existing or expanded facilities onshore would be a cheaper option.
"It's about infrastructure sharing and it's about taking a sensible approach ... and making sure capital is used efficiently," Woodside CEO Peter Coleman told reporters following the group's annual results last month.
GDF Suez and Australia's Santos also scrapped a proposed FLNG project for the Bonaparte LNG field off northern Australia in June 2014.
Meanwhile, monthly U.S. LNG exports have risen above 1 million tonnes since the start of this year, hitting a record 1.05 million tonnes in February, Thomson Reuters Eikon trade flow data shows.
Another 8.6 billion cubic feet per day of U.S. gas production (68.3 million tonnes per annum of LNG) is currently under construction and scheduled to come on stream by 2020.
"With the market headed for oversupply until the early-2020s, it would be difficult to find a bankable new FLNG project in the near term," said Edmund Siau, a gas analyst at energy advisory FGE.
(Reporting by Mark Tay, Additional reporting by Sonali Paul; Editing by Richard Pullin)
Email