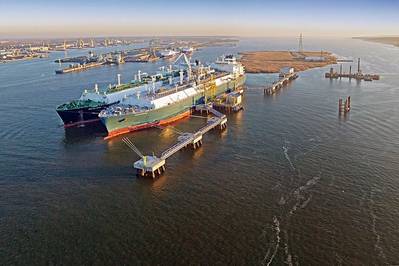 Currently in the process of exporting its 10th LNG cargo, the vessel's proof of concept continues to add momentum to both existing and new opportunities under discussion. Discussions also continue with field operator Perenco as to the timing of utilization of Hilli Episeyo's excess capacity.

Golar and affiliates of Keppel Shipyard Limited and Black and Veatch closed the sale of 50 percent of the common units in Golar Hilli LLC to the Partnership on July 12, . Although Golar continues to consolidate Golar Hilli LLC, after this transaction, net of non-controlling interests, Golar is entitled to 44.6 percent of cash flows from the initially contracted toll fee under the liquefaction tolling agreement, 89.1 percent of the Brent oil linked cash flows and 86.9 percent of any future cash flows from the vessel's expansion capacity.

Annual cash generation to Golar based on current Brent Crude prices of $73bbl is expected to amount to approximately $40 million.

FEED work for the provision of a FLNG vessel to service the BP operated Greater Tortue/Ahmeyim project offshore Mauritania and Senegal has made significant progress and is in its final stages. BP has previously communicated to their shareholders that they expect to take FID on the project before the end of 2018. Golar remains ready to support this.

Golar has also spent considerable time developing the Mark II FLNG vessel design. This work has been done in conjunction with other Asian yards. Significant progress has been made on the 3mtpa design and indications are that this will be cost competitive with the Mark I (Hilli Episeyo) design.

These yards, in combination with export credit agencies and domestic banks, are likely to offer more attractive financing packages. The Mark II concept has applications that include the US Gulf Coast Delfin LNG project and Fortuna.

Recent changes in leadership and sponsorship put the Delfin project on a clear path to FID and see the project take on an increased level of activity for Golar. When connected to Delfin's existing pipeline infrastructure, the Mark II FLNG solution is expected to deliver the lowest cost liquefaction solution in North America giving Delfin and Golar an early mover advantage marketing a relatively small parcel of LNG into a demand driven market.

Further to the Joint Development Agreement signed in June 2017, Golar and Delfin are now working to finalize terms for the establishment of a joint venture company to own and develop the first floating liquefaction vessel.