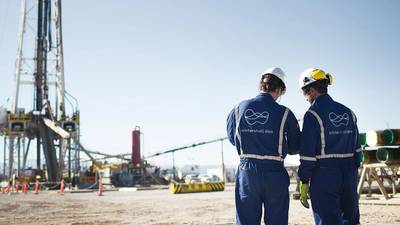 German oil and gas company Wintershall Dea reported a sharp drop in earnings in the first quarter of 2020, prompting it to cut costs and reduce oil and gas exploration.

Production amounted to 626,000 barrel of oil equivalent per day (mboe/d) in Jan-March, unchanged from the same 2019 period, the company said in a statement on Wednesday.

Due to a weaker price environment for commodities, earnings before interest, tax, depreciation, amortization, and exploration expenses (EBITDAX) fell by 42% to 481 million euros ($526.36 million).

A previous plan to float Wintershall DEA, the oil and gas business that BASF owns jointly with Russia's LetterOne, during the second half of 2020 was off the table.

Like its peers, the company faces slumping oil and gas demand during the coronavirus crisis.

"We have taken decisive actions by reducing our capital expenditure by 30%, operating costs by 10% and as previously announced, suspended our common dividend," Chief Executive Mario Mehren said.

Full-year capital spending on production and development was reduced by 30% to 1 billion to 1.2 billion euros, Wintershall said.

Exploration costs will be reduced by 20%.

Wintershall, which had already suspended its dividend on March 18, also said it had increased working capital lines by 450 million to 2.4 billion euros to boost liquidity.