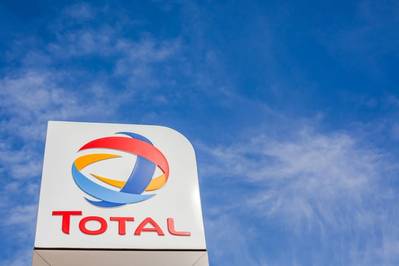 French energy major Total promised to pay a steady cash dividend and said it can break even with low oil prices after the impact of the coronavirus outbreak and a collapse in fuel demand led to a 35% first-quarter profit fall.

It also raised its climate ambitions, saying it aims to reach net-zero emissions from its operations and its energy products sold to customers by 2050 at the latest, but only in Europe.

For oil majors, the crisis caused by the novel coronavirus compounds a climate crisis that has deterred some investors from investing in planet-warming fossil fuels.

Maintaining dividends is one way to lure shareholders and Total's shares rose 7.5% in opening trade, outperforming the Paris CAC 40, which gained 0.8%. By 1030 GMT, Total was still 5.9% higher.

Dividends, however, rely on cash, meaning some peers have halted payouts.

Royal Dutch Shell last week said it was cutting its dividend for the first time since World War II to preserve cash.

Total said it was keeping its first-quarter interim dividend stable at 0.66 euros ($0.7199) per share, helped by a low debt-to-capital ratio or gearing, and that is would be paid entirely in cash.

It said it was taking extra measures to protect its balance sheet and maintain a breakeven point below $25 per barrel in 2020.

Global oil prices were close to $30 a barrel on Tuesday, recovering from a deep slide in April that took prices to more than 20-year lows.

"The group is facing exceptional circumstances: the COVID-19 health crisis, which is affecting the world economy and creating major uncertainties, and the oil market crisis, with the sharp drop in oil prices since March," Chairman and CEO Patrick Pouyanne said in a statement.

Total said CEO Pouyanne's remuneration for the year would be cut by around 30% compared with 2019, and other executives and board members would also earn less.

Total had planned to accelerate its dividend growth in the coming years, with a guidance of increasing the dividend by 5% to 6% per year.

On Tuesday, it did not give guidance on any full-year payout.

While tackling short-term challenges through focused investment and cost-cutting, Pouyanne said the company would not neglect the longer term and an aim to become "a broad-energy company," with net zero emissions by 2050 in Europe.

Although the company's net adjusted profit fell 35% to $1.78 billion, it beat analysts' forecasts.

The market had expected Total's net income for the quarter to be $1.3 billion, the mean estimate of 4 analysts, based on Refinitiv data, found.

Equity research analysts at Jefferies said Total was being cautious on shareholder returns but not overreacting, while Redburn analysts, said in a note the results sent mixed messages.

"The Q1 2020 dividend was set at 0.66 euros, flat year-on-year but a 3% cut compared with the run rate of the second half of 2019," Redburn said. It said Total in theory still had the option of a scrip dividend, or substituting shares for cash, at a later stage.

Total said that as oil prices fell by more than 30% on average in the quarter, its cash flow shrank by 31% year-on-year to $4.5 billion.

Although its oil and gas output rose by 5% to more than 3 million barrels of oil equivalent per day (mboepd) in the quarter, production for the year is expected to fall by at least 5% to between 2.95 mboepd and 3 mboepd, it said.

In response to lockdown demand destruction, Total announced an action plan on March 23 to cut its planned investments for 2020 by more than 20% to $15 billion.