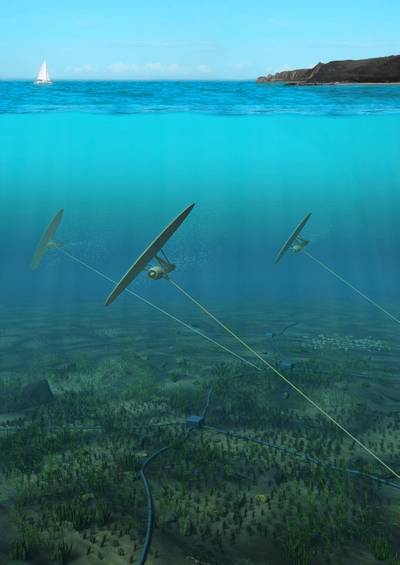 Deep Green, an underwater kite construction from the Swedish company Minesto, is set to be deployed in 2017 at the Holyhead Deep site off the coast of Anglesey, Wales.

Delivering a customized turbine solution in 2016 for the underwater power plant project will be SCHOTTEL HYDRO. And while the turbine complements the first full-scale Deep Green device, 19 more devices are due to follow during the coming three years and will eventually form an array with an overall capacity of 10 MW.

Deep Green allows the harvesting of tidal energy in slower waters which have been thought unproductive so far – with low current velocity of two meters per second and in great depth of 60 to 120 meters.

Deep Green resembles an underwater kite and consists of a wing and a turbine. The kite has a wingspan of 12 meters and is attached by a tether to the sea bed. It moves along a preprogrammed 8-shaped trajectory and thus increases the water current velocity around the kite by its own speedy movements. The attached turbine therefore works with an up to 10 times higher current velocity than originally available. The obtained energy is transferred onshore via a cable connection on the seabed.

For Minesto, SCHOTTEL HYDRO develops a new turbine variant, which will fit the requirements of Deep Green: The lightweight nacelle power-take-off system includes turbine, drive train, power electrics and auxiliary devices. All components will be tailor-made to fit the electric system of the kite.

The drive train concept is based upon the Schottel Instream Turbine (SIT) concept with its inline arrangement of open rotor, rotor shaft including sealing and bearing, planetary gearbox and generator. In contrast to this readily available device with rotor diameters between three and five meters the Deep Green turbine will be significantly smaller and operate at higher rpms.

In addition to the turbine engineering and manufacturing, SCHOTTEL HYDRO will also carry out a full-load test series on a specially built test stand prior to installing the turbine in the third quarter of 2016.

The first commercial project with Deep Green will start with the deployment of the first full-scale device in Holyhead Deep 2017. Holyhead Deep provides low flow tidal velocities (1.5 m/s – 2 m/s mean peak flow) at a depth of 80-100 meters. Twenty devices with a capacity of 500 kW each will be installed in an array until 2019 and reach an overall capacity of 10 MW – enough energy to power 8,000 homes. The project is supported by the European Regional Development Fund through the Welsh Government.