Technology: Greenhouse Gas Emission Capture and Storage to the Fore 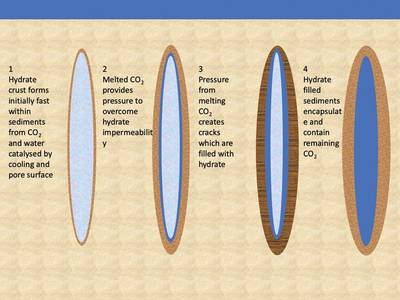 Shipping emits close to 1 billion tons of CO2 each year and the shipping industry needs carbon-free solutions to achieve the IMO’s 2050 target of a 50 percent reduction, compared to the 2008 level, in these massive emissions. However, according to Denmark’s Maritime Development Center, while better technical and operational solutions must continue to be pursued, they will only bring the industry part of the way: “Low- or zero-carbon fuel solutions must be introduced and scaled by 2050 to reach the target,” the organization has stated. Thus, while a large number of initiatives and pilot projects with zero-carbon or carbon-neutral fuels are currently being undertaken, a more practical approach may be the use of on-board carbon capture with subsequent storage at appropriate sites and, in this context, the use of conventional fossil fuels may become carbon free.

MDC sees analogies between the IMO’s 2020 sulfur regulations and the 2050 zero-carbon target: “The expected energy penalties in adopting a zero-carbon strategy are low – it’s a ‘no-brainer’,” said Henrik O. Madsen, former DNV GL President and CEO. “Shipowners should take responsibility and not compete but collaborate in the area of carbon footprint reduction to meet the 2050 zero-carbon target. In my opinion, this is an area that is far too important to become the victim of competition – this is a problem for the industry at large that will not go away, and the industry must collaborate to satisfy society’s expectations.” 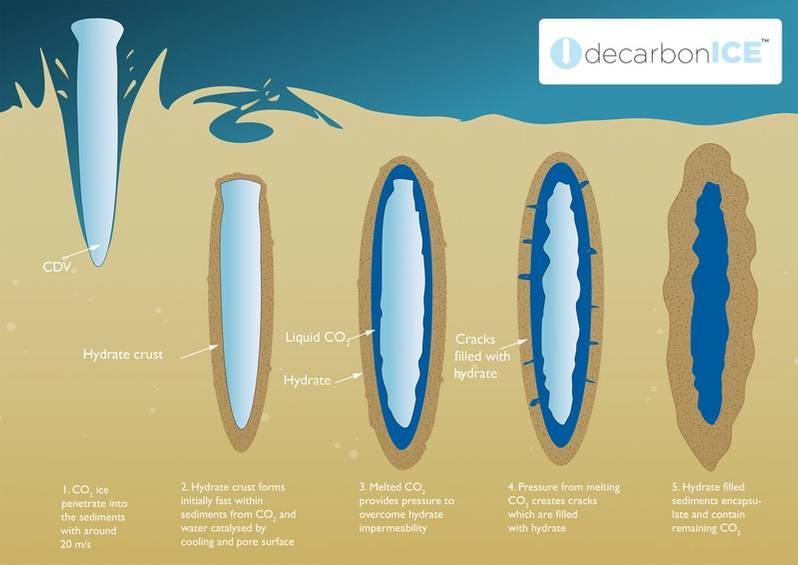 Dry ice formed by cooling exhaust gasses to -120°C is formed into Carbon Descent Vehicles that sink to depths of about 500 meters, where they penetrate the seabed, storing CO2 safely as liquid CO2 and CO2 hydrate. Image: MDCdecarbonICE CO2 capture and storage

Madsen is chairman of the decarbonICE CO2 capture and storage project being run by MDC, in which international shipping carriers act as project sponsors, supporting the platform financially, while producers of maritime equipment and services act as in-kind contributors, supporting the platform with non-monetary services and assets, such as knowledge, experiments, working hours and equipment.

The decarbonICE technology is based on two new main ideas, one for CO2 capture and one for its storage. CO2 and other greenhouse gases (GHGs) in a ship’s exhaust are captured on board by cooling exhaust gasses to about -120°C, creating dry ice. Some of the NOx, and in particular those that have a GHG effect, will also freeze and become part of the dry ice, while others will be vented to the atmosphere. There are several options for dealing with SO2, including the introduction of scrubbers. Water vapor is removed early in the cooling process.

Using well-established offshore technology, the dry ice is shaped into Carbon Descent Vehicles (‘torpedoes’) that are sent down to the ocean floor, sinking to depths of 500 meters at speeds of about 25 meters per second, where they bury themselves in seabed sediments, storing the carbon dioxide safely and permanently as liquid CO2 and CO2 hydrate. Each CDV will be launched to the sea and not lose any or at most 1 percent of its CO2 to the water during its descent to the sea floor. During this descent phase, it is furthermore ensured that no large mammals like whales are affected.

Started in October 2019, the decarbonICE project will run throughout 2020, initially with feasibility studies being conducted in the laboratory and the initiation of IMO approval for the technology. “Shipping companies will need to demonstrate the practicality and any operational issues or problems associated with the technology,” said Madsen, “and full-scale operation will take place later on, however, the members of the project are already discussing the possibility of starting the first projects demonstrating parts of a decarbonICE technology on board a vessel.”

Silt- and sand-rich host sediments on the seabed in regions such as the Gulf of Mexico are the best locations in which to store CO2 in liquid or hydrate form, providing an environmentally-friendly, safe and permanent ‘home’ for captured greenhouse gas emissions. Image: MDCA solution for newbuilds and retrofits
The decarbonICE concept is intended to be applied not only on newbuilds, but also to be retrofitted onto existing ships, thereby adding extra impetus to efforts to achieve the IMO 2050 CO2 target. MDC said that in combination with future carbon-neutral fuels such as biofuels and electro fuels, the technology could create carbon-negative shipping and thus contribute to atmospheric carbon reduction at a significantly lower cost than shore-based carbon capture. “While we support a goal of availability of zero-carbon or carbon-neutral fuels, we believe that a bridging carbon-free solution is needed, utilizing existing assets in terms of ships, propulsion systems and fuels,” said Madsen. “The decarbonICE project is intended to offer exactly that at a predicted low energy penalty well below 10 percent. However, we have no illusion that we can provide a 100 percent emissions reduction solution – even a 70-80 percent solution for deep-sea shipping would be very attractive.”

As well as being developed for use with existing fuels such as HFO, MGO and LNG, the decarbonICE project also intends to develop a concept that will work in a future where neutral-carbon fuels such as biofuels or synthetic fuels (‘e-fuels’) become available. MDC said the combination of such fuels and decarbonICE would lead to carbon-negative shipping, in other words that shipping would in future reduce the amounts of CO2 in the atmosphere. MDC added that it may be possible that the first system could be installed on board a newbuild some three years after IMO approval of the technology and that retrofitting on an existing vessel could be achieved even more quickly.