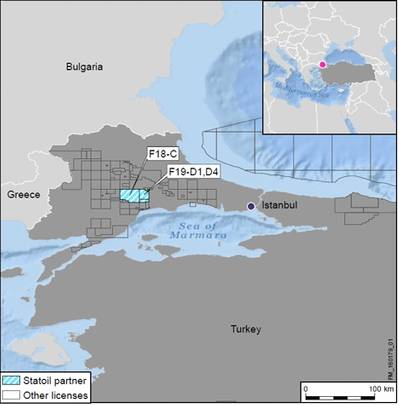 Statoil announced it has entered a binding letter agreement into two exploration licenses in the Thrace region in the European north-western part of Turkey.

Statoil will have a 50 percent interest in the Banarli licences, while the operator Valeura Energy Inc., a Canadian exploration company listed on the Toronto Stock Exchange will keep the remaining 50 percent. The shallow formations above 2,500 meters will be 100 percent retained by Valeura.
The work program in the licenses consists of several phases, where the first includes the commitment of drilling one exploration well, with planned spudding late 2016 or early 2017. The exploration phase will test unconventional gas potential in the deep parts of the basin.
The exploration licenses cover an area of approximately 540 square kilometers in proximity to existing infrastructure in a region where gas has been produced since the 1920s.
“Entry into the north-western part of Turkey is in accordance with our exploration strategy to build a diverse portfolio of low commitment frontier opportunities with impact potential,” said Erling Vågnes, senior vice president for Statoil (STO)’s exploration activities in the Northern Hemisphere.
“We look forward to explore the licenses further together with the operator Valeura, and we are optimistic with regards to the potential. If successful, this is an opportunity that will play to Statoil’s strengths in drilling and reservoir management,” Vågnes said.
The agreement is pending governmental approval, which is expected by the end of September 2016.
Email