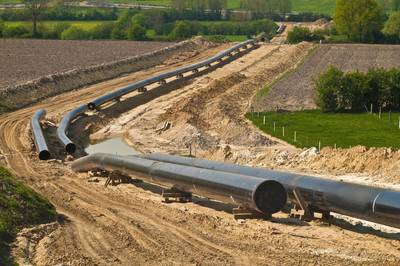 The U.S. State Department will approve on Friday the permit needed to proceed with construction of the Canada-to-United States Keystone XL oil pipeline, a project blocked by former President Barack Obama, according to two government sources familiar with the process.
The move would mark the beginning of process that could be lengthy and complicated by approvals needed by state regulators and legal challenges.
But President Donald Trump, a Republican, supports Keystone and days after he took office in January ordered its construction. That could mean that project, proposed in 2008, will eventually be completed.
White House spokesman Sean Spicer said the administration would provide an update on Keystone on Friday but did not offer any details.
One U.S. government source familiar with the process said on Thursday the State Department was working to get the approval done before Monday, the end of the 60-day timeline under Trump's January executive order for the construction of Keystone and the Dakota Access pipelines.
The State Department's undersecretary for political affairs, Tom Shannon, is expected approve the cross-border permit for TransCanada Corp's pipeline since Secretary of State Rex Tillerson, the former CEO of ExxonMobil, recused himself from the matter.
The multi-billion dollar Keystone pipeline would bring more than 800,000 barrels-per-day of heavy crude from Canada's oil sands to U.S. refineries and ports along the Gulf of Mexico, via an existing pipeline network in Nebraska.
Obama had rejected the pipeline saying it would do nothing to reduce fuel prices for U.S. motorists and would contribute emissions linked to global warming.
TransCanada resubmitted its permit application after Trump's executive order. Spokesman Terry Cunha said the company was working closely with the State Department.
"Monday is the deadline, so that's what we're working towards," Cunha said.
Conservatives said they supported quick approval. Nick Loris, an energy and environment researcher at the Heritage Foundation, said approval would "reestablish some certainty and sanity to a permitting process that was hijacked by political pandering."
Environmental group Greenpeace had pushed for Tillerson to recuse himself from the decision on Keystone, as Exxon could profit from the pipeline. It said it would fight the project.
"We will resist these projects with our allies across the country and across borders, and we will continue to build the future the world wants to see," Diana Best, a Greenpeace climate campaign specialist said.
Further Hurdles
A stretch of Keystone XL also awaits approval from Nebraska regulators. Transcanada has to file its pipeline route plans with the state's Public Service Commission, which is required to hold public hearings on the proposal.
Keystone's construction costs could be higher than the $7 billion estimated after it was first proposed, said Michael Wojciechowski, vice president of Americas oil and refining markets research at Wood Mackenzie.
"Final costs are still to be determined, but they have done nothing but go up over time," he said.
Still, there could also be some savings on labor given recent layoffs due to the recent oil price drop, he said.