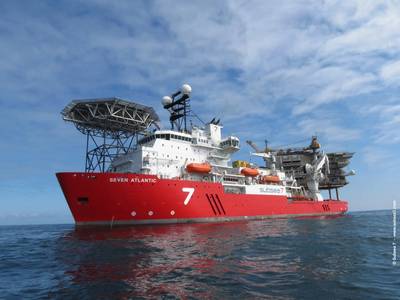 Schlumberger, the world's largest oilfield services firm, and smaller peer Subsea 7 said on Friday they were entering exclusive talks to form a joint venture to deliver subsea installations and services for oilfields.
The news lifted Subsea 7 shares on hopes the talks could be the first step towards a full takeover, in a sector that has already seen consolidation with the 2016 merger of Technip and FMC Technologies (FTI).
In recent months, oil firms have returned to profits due to higher oil prices and the benefits of deep cost cuts they made during the downturn. But their suppliers are still feeling the squeeze and trying to cope with low profitability.
Since 2015 Schlumberger (SLB) and Subsea 7 have collaborated for some of their work in designing, building and laying oil and gas production installations on the seabed.
The two firms now aim to build a 50-50 joint venture to deliver subsea installations, maintenance and repair services.
"The proposed joint venture will give us the opportunity to capitalise on the synergies already established and significantly improve subsea economics over the lifetime of the field," Schlumberger said in a statement.
Friday's announcement and the Technip/FMC Technologies merger show the oilfield services market has changed in favour of more integrated solutions, said Arctic Securities analyst Tord Aasen Augestad
"We view the deal as highly positive for Subsea 7," he wrote in a note to clients, adding that the joint venture "improves their competitive position and creates a unique platform to capture market share in a recovering subsea market."
Shares in Subsea 7 were up 5.3 percent at 1053 GMT. It was the top performer in the European oil and gas index and the second-best performer of the pan-European index.
"Speculative appeal, next move could be M&A between the two groups," said Natixis (KN.PA) analyst Baptiste Lebacq.
Subsea 7 top owner, Norwegian billionaire Kristian Siem, has long called for consolidation, saying it was the "way to go" to cope with drastic cost cuts from oil companies.