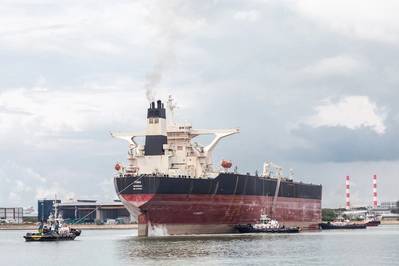 The very large crude carrier arrives at the Keppel shipyard in Singapore in November 2017 to be converted for the FPSO Liza project (Photo: SBM Offshore)

SBM Offshore said it has secured the $720 million project financing for FPSO Liza through a consortium of 12 international banks, completed on December 19, 2017.

SBM Offshore said it expects to draw the loan in full, phased over the construction period of the FPSO. The financing will become non-recourse once the FPSO is completed and the pre-completion guarantees have been released. The post completion project loan has a tenor of 10 years, with a variable interest cost of LIBOR plus 1.65 percent.
The converted very large crude carrier (VLCC) FPSO Liza is owned and will be operated by SBM Offshore (IHCB.F). The lease and operate contract includes an initial period of 10 years with extension options up to an additional 10 years.
The FPSO is designed to produce up to 120,000 barrels of oil per day, will have associated gas treatment capacity of circa 170 million cubic feet per day and water injection capacity of circa 200,000 barrels per day.
The FPSO will be spread moored at the Liza field located in the Stabroek block circa 200 kilometers offshore Guyana, in water depth of 1,525 meters and will be able to store 1.6 million barrels of crude oil.
Esso Exploration and Production Guyana Limited is the operator and holds a 45 percent interest in the Stabroek block. Hess Guyana Exploration Ltd. holds a 30 percent interest, and CNOOC Nexen Petroleum Guyana Limited holds a 25 percent interest.
Email