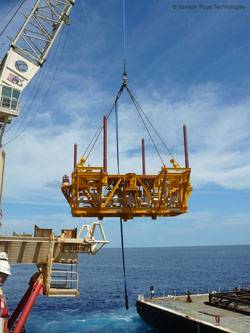 Samson high-performance synthetic slings helped Technip install subsea hardware at Petrobras’ Cascade & Chinook project. Installing two pumping stations and two manifolds at Petrobras’s Cascade and Chinook fields in the Gulf of Mexico at depths in excess of 2,500m was accomplished with a “wet handshake” and the assistance of Samson’s AmSteel-Blue fabricated into lifting slings for the operation. Technip was the contractor, and Deep Blue was the installation vessel used during the deepwater installation. The project is among the deepest subsea installations in the Gulf of Mexico, and marks the first use of an FPSO in U.S. waters. While formulating installation procedures, Southwest Ocean Services (SWOS) and Samson's offshore technical sales team were in contact with the operations and installation team at Technip, who intended to use the wet handshake technique to transfer loads from Deep Blue’s overboard crane to the A&R winch in the moonpool to the seafloor. Since the handshake was to be accomplished with ROV’s, the use of wire rope slings would have presented many rigging and handling issues due to the weight and stiffness of the wire.

SWOS worked with Technip’s design team to develop a synthetic solution, not only for the sling, but also for the custom chafing gear and the project specific ROV handling slings.

Samson’s AmSteel-Blue, a high-strength, lightweight Dyneema fiber rope was used to fabricate the slings. AmSteel-Blue is as strong as wire ropes the same size, yet is neutrally buoyant or slightly positive in seawater, making handling by ROV a simple matter requiring a minimum of power. Southwest Ocean Services, a Samson master distributor located in Houston, Texas, fabricated the slings to Technip’s specifications from existing stock. The 3.625-in. (88-mm) diameter AmSteel-Blue was spliced into grommets 50m in length. Both eyes of each sling were fitted with Samson’s DC Gard high-performance chafe gear, equipped with two small-diameter ROV handling grommets made from .5-in. Samson Quik-Splice, and a polypropylene rod inserted into the eye section of each small grommet. This resulted in a rigid eye section with positive buoyancy perfect for capture by the manipulation arms of an ROV. At total of 16 slings rated at 190-metric-ton working loads were fabricated and tested for the installation of four hardware packages and four suction piles.

At the time of the installation, the subsea hardware arrived via barge, with each of the hardware packages and suction piles pre-fitted with two high-performance synthetic slings. Deep Blue’s 400-metric-ton outboard crane was used to lift the hardware packages using one of the two attached slings. The hardware was lowered to 100m, where an ROV captured a special grommet attached to the second lifting sling and ferried the eye of the sling to the hook of Deep Blue’s moonpool A&R winch. With the load transferred to the A&R winch, the sling was freed from the hook of the outboard crane and the hardware lowered to the seafloor for installation. The wet handshake was complete.