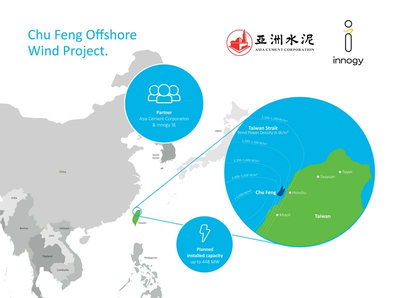 RWE, Europe's third-largest renewables group, is partnering with Taiwan's Asia Cement Corp to enter one of the strongest-growing offshore wind markets outside Europe, its renewable arm said on Thursday.

The partnership is for the Chu Feng offshore wind project, which intends to participate in the next grid allocation round in Taiwan's offshore auction, Innogy, whose renewable activities are part of RWE, said in a statement.

The project has a planned installed capacity of up to 448 megawatts (MW) and, if realized, will be located off the northwest coast near Hsinchu City in the Taiwan Strait.

Apart from the United States, Taiwan is one of the fastest-growing markets for offshore wind outside Europe and aims to have 15.5 gigawatts (GW) of installed capacity by 2035. Europe, the world's top market, had 22 GW as of 2019.

"The Chu Feng project will enable us to enter this growing market with a strong local partner at our side, whose local expertise complements our global experience and technical know-how," Sven Utermoehlen, senior vice president Renewables Operations Offshore at Innogy, said.

RWE became the world's No.2 by taking over the renewables activities of E.ON and Innogy.

Its move comes shortly after smaller German rival EnBW brought in Japan's JERA - a joint venture of Tokyo Electric Power Co and Chubu Electric Power - to take a stake in Taiwan's Formosa 3 wind project, which is also co-owned by Macquarie.