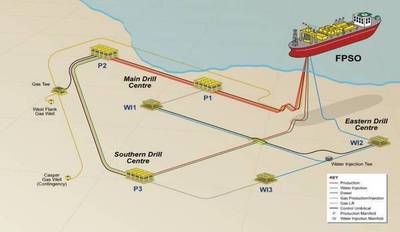 Oil and gas company Rockhopper, with a share in the Sea Lion project off the Falkland Islands, has announced a set of cost-cutting measures which include headcount reductions, and directors' salary reduction.

The company said Tuesday that due to the "external events affecting the sector" - meaning low oil prices and the pandemic - it would further reduce ongoing G&A costs and re-balance executive director remuneration from cash to equity "while ensuring retention of key staff, capabilities, and knowledge within the business."

The company's measures include a permanent reduction to executive director base remuneration, employee headcount reduced including certain roles transitioning to part-time, reductions to adviser and contractor costs, decreased head office costs through relocation outside of London.

It did not say how many jobs would be cut.

Offshore Engineer reached out to Vigo Communications, a company responsible for Rockhopper's media relations, seeking more info on the number of jobs cut.

A spokesperson said: "Rockhopper does not comment on employment matters so we are unable to add any further information to that which was included in this morning’s announcement."

"It is anticipated that any base salary increases over the next five years will be restricted to the rate of inflation only, other than in exceptional circumstances," the company added.

The company further said it was still working to farm-out a part of its share in the Sea Lion to Navitas, and to further progress the financing of the project.

Worth reminding, Premier Oil (PMOIF), the operator of the Falkland Islands offshore development, last week said it had suspended the Sea Lion-1 oil project to minimize ongoing spend in light of the current market conditions.

"Sea Lion Phase 1 is complete from a technical aspect and all of the work which has been done to date is being fully documented, such that the project can be reactivated once the macroeconomic outlook improves," Premier Oil said. Read more here.