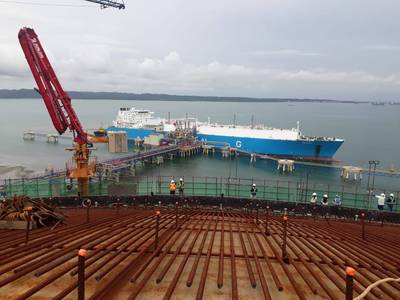 Panama has imported its first liquefied natural gas (LNG) cargo to commission the newly built $1 billion Costa Norte facility and power plant at Colon, expected to be a launch-pad for LNG trade across Central America.

Many utilities in Central America and the Caribbean remain reliant on burning oil to generate electricity, but LNG offers a cleaner, cheaper and more efficient alternative.

AES Panama, a unit of U.S. electric utility AES with a 50 percent stake in the facility, announced the delivery on Friday, saying the cargo will supply the 380 megawatt (MW) AES Colon gas-fired power plant as test flows commence.

In 2017, Engie and AES established a joint venture to market and sell LNG to third parties in Central America, using the 1.5-million-tonnes-per-annum (mtpa) capacity Panama terminal as a distribution hub.

According to the deal, Engie will supply up to 0.4 million tonnes per annum (mtpa) to the power plant from 2018.

The terminal's remaining capacity will be used as a hub for onward sales within the region, including up to 0.7 mtpa sourced by Engie mainly from the Cameron LNG plant, which is due to start production in early 2019.

Costa Norte can reload initially imported cargoes for onward export to regional markets, truck from the terminal, and supply LNG as a ship fuel from its location at the mouth of the Panama Canal.

The AES-Engie JV in Panama builds on a separate deal between the two companies struck in 2016, whereby both groups will market LNG in the Caribbean from the AES Andres' import terminal in the Dominican Republic.

The combined import capacity of both terminals is roughly 3 mtpa.