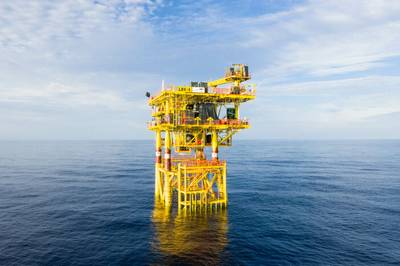 For illustration only; An OMV offshore platform in Malaysia - © OMV Aktiengesellschaft

Austrian energy group OMV sees hope for a recovery in oil prices in the second half of 2020 helped by increased fuel demand and output cuts by producers such as Saudi Arabia, its chief executive said.

The spread of the coronavirus has knocked global demand and weighed on crude prices and oil companies' profits.

But the willingness of producers such as Saudi Arabia and Norway to drastically cut output shows oil prices have a chance to return to a reasonable level, OMV CEO Rainer Seele said.

"We therefore expect the oil price to gradually recover in the second half and to average $40 for the year," Seele said in an interview with Reuters.

Gasoline and diesel consumption in Austria halved in April, but was back at 60% after all shops were allowed to reopen in early May and has hit 65% in the past few days, he said.

Austria was one of the first countries in Europe to close shops and restaurants and urge people to stay at home, but has also been early to ease lockdown measures.

OMV is curbing its oil production in the United Arab Emirates and in Norway to meet agreed quotas but it does not expect any production shutdowns, Seele said.

"I also do not see any major production interruptions in our refinery business."

OMV benefited from the fact that it has transferred its European refineries from predominantly fuel refineries to jet fuel and petchem units, allowing it to shift production from low-demand kerosene to sought-after plastics.

In particular, demand for polymers used to produce protective gear and sterile packaging has risen significantly.

"As a result, OMV has an above-average capacity utilisation of more than 80% in Europe," Seele said.

Rivals including BP and Total are currently operating refineries at 60-70%.

Confronted with investor criticism of doing less than rivals to limit global warming, Seele said he will announce concrete climate targets this summer.

To cover its energy consumption, OMV would rely to a large extent on renewable sources in the future.

"But we won't build up (renewable energy) as a business unit, instead we will move towards high value chemical products and recycling."

Seele said he plans to decide on the sale of OMV's nearly 300 German filling stations by year-end after more than 20 parties expressed interest.

A decision on its pre-coronavirus crisis proposed 2019 dividend of 2.00 euros per share will be made in the second half of the year.

"Once we have seen the second quarter and have an idea regarding the third quarter, then the management board will meet again and discuss."