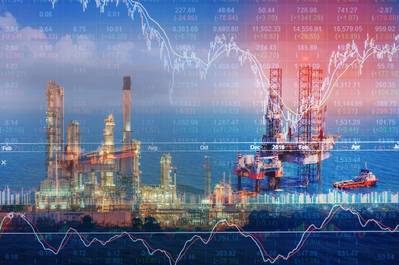 Oil prices rose on Friday as the world's richest nations poured unprecedented aid into the global economy to stop a coronavirus-driven recession and U.S. President Donald Trump hinted he may intervene in the price war between Saudi Arabia and Russia.

"The latest bout of price strength is unlikely to have the legs to carry on. The world is awash with oil," said Stephen Brennock of oil broker PVM. "Simply put, oil is facing a prolonged period of demand destruction."

As the spread of the coronavirus brings much of the world to a halt, nations have poured increasing stimulus into their economies while central banks have flooded markets with cheap dollars to ease funding strains. Sources told Reuters that China was set to unleash trillions of yuan of fiscal stimulus to revive an economy facing its first contraction in four decades.

"Positive risk sentiment and a weaker U.S. dollar are helping crude on Friday. Also, comments from U.S. president Trump that he might get involved in the oil (price) war at an appropriate time is supporting oil," said UBS oil analyst Giovanni Staunovo. "My concern relates to the likelihood of more mobility restrictions around the globe, which is likely to weigh further on oil demand.

Hence, the worst is probably not over for oil prices." U.S. crude and Brent have both collapsed about 40% in the past two weeks since the breakdown of talks between the Organization of the Petroleum Exporting Countries (OPEC) and its allies, including Russia, leading Saudi Arabia to ramp up supply.

Trump said on Thursday that he would act on the price war at the appropriate time, saying low gasoline prices were good for U.S. consumers even though they are hurting the industry. "This is because the low prices are threatening to hit the U.S. shale oil industry hard, thereby jeopardising the U.S. position as the world's largest oil producer," Commerzbank analyst Carsten Fritsch said.

However, the Kremlin on Friday said that Russia and Saudi Arabia have good relations when it comes to oil markets and Moscow does not need anyone else to intervene.

Oil prices pared some of their gains after the Russian remarks. Despite the rise of oil prices on Thursday and Friday, Brent was still on track for a weekly loss of more than 13%, its fourth consecutive weekly decline. Supply restraint by core OPEC producers could push up second-quarter Brent prices to $30 a barrel, while U.S. measures to support the market could underpin prices in the near term, Goldman Sachs said in a research note.