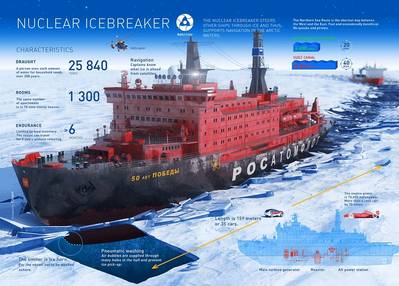 The nuclear-powered, 260 meter long, 33980 tons deadweight 'Sevmorput' this week sailed from Murmansk to Arkhangelsk where it is to pick up more than 17,000 tons of construction goods.

The lighter aboard ship (LASH) system carrier of FSUE Atomflot, the world’s only ship of its kind, will deliver thousands of tons of construction materials to the Arctic LNG 2 project in peninsula Gydan.

At the port of Arkhangelsk, the ship will be loaded with pallets, containers and equipment. Upon completion of the loading works, nuclear-powered container carrier will proceed to the Utrenneye field on the Gydan peninsula in the Gulf of Ob.

The Sevmorput crew will ensure cargo delivery and unloading onto the shore ice. The batch of cargo will consist of about 17,000 freight units for construction of Arctic LNG 2. This amount of cargo could be carried by three voyages if carried ships of the Pavlin Vinogradov type (gross tonnage – 6,395 tonnes).

The ship is to leave the port of Arkhangelsk for the Gydan peninsula in the middle of March. One more voyage to the Utrenneye field is scheduled for April.

The nuclear-powered icebreaking combo LASH carrier / container ship Sevmorput (named after the Northern Sea Route) was built at Kerch, USSR based Zaliv Shipyard. The Sevmorput was laid down on November 2, 1984, launched on February 20, 1986 and put into operation on December 31, 1988.