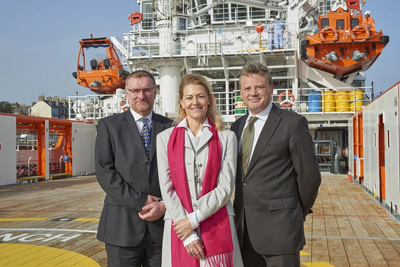 A new multi-role emergency response and rescue vessel (ERRV) built by Aberdeen-based Sentinel Martine as part of a £110 million ($145 million) investment has been deployed to operations in the southern North Sea. Forties Sentinel was officially named at a ceremony in Great Yarmouth.

Forties Sentinel has been contracted to INEOS Breagh to provide support for the firm’s production facilities in the Breagh gas field. INEOS has also chartered a second ERRV from the Sentinel Marine fleet – Sentinel Ranger – for the field.

It is the second vessel to be christened by Sentinel Marine in recent weeks, with Mariner Sentinel being deployed to Statoil (STO)’s Mariner field last month. She is one of nine new-build ERRVs ordered by the firm: six are already in operation and three are in various stages of construction at a shipyard in China.

In addition to the primary role of protecting offshore workers, the ERRVs, which are equipped with the latest technology, can perform a number of other tasks, making them extremely efficient to operate.