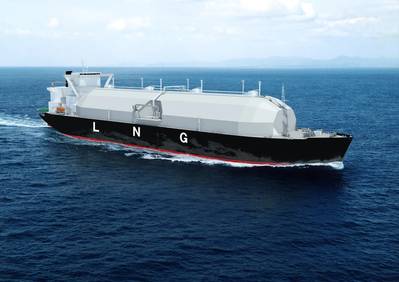 Mitsubishi Heavy Industries, Ltd. (MHI) has received an order for an LNG (liquefied natural gas) carrier for Nippon Yusen Kabushiki Kaisha (NYUKF) (NYK Line) through MI LNG Co., Ltd., a joint venture established with Imabari Shipbuilding Co., Ltd. in April 2013. The order - the first received via MI LNG - is the eighth to date for the Sayaendo, a next-generation LNG carrier offering superior fuel efficiency developed independently by MHI. Completion and delivery of the ship are scheduled for 2017.

The Sayaendo features four Moss spherical tanks protected by a peapod-shaped continuous cover integrated with the ship's hull. This innovative configuration enables a reduction in weight while maintaining the ship's overall structural rigidity, and also significantly reduces air resistance during navigation. For its main power plant the Sayaendo adopts MHI's "Ultra Steam Turbine Plant" (UST), a turbine that provides higher thermal efficiency through effective use of thermal energy by reheating steam. Fuel efficiency can be improved by more than 20% compared to conventional ships.

MI LNG specializes in the design and marketing of LNG carriers. It is the first company in Japan to put in place a structure enabling response to large-scale project negotiations involving constructions of new LNG carriers, which are currently in an expanding trend fueled by rising global demand for LNG. MI LNG benefits from a combination of MHI's capabilities in technology development and Imabari Shipbuilding's cost-competitiveness, and MHI and Imabari Shipbuilding's shipyards combined have the capacity to construct more than eight ships per year. Besides the Sayaendo, these shipyards can accommodate a wide range of ship types, from standard spherical tank cover Moss vessels to membrane-type ships.

Orders for the Sayaendo have been received at a steady pace ever since the first order - simultaneously for two units – was received in October 2011. Owing to its outstanding energy efficiency and environmentally compatible performance, the Sayaendo is emerging as a leading product among "eco-ships" - ships now the focus of active development and adoption trends in the shipbuilding and marine transport industries.