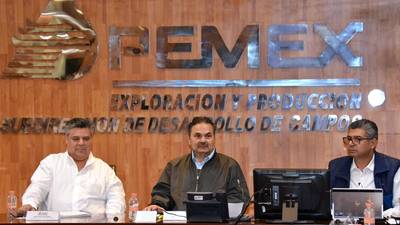 Mexico's finance ministry said on Monday that it will implement measures to strengthen the finances and boost the production of state oil firm Pemex, specifically by increasing the limit on deductions for costs related to extraction and exploration.

That move will free up resources of some 11 billion pesos ($578 million) per year through 2024 for the "exclusive" use in Pemex capital expenditures for exploration and production, the ministry said in a statement.

Petroleos Mexicanos, as the firm is formally known, has seen crude output drop for more than a decade as its major fields age and it has struggled to replenish reserves.

The ailing oil giant also faces the possibility of a credit ratings downgrade due to costly proposals by the new government of leftist President Andres Manuel Lopez Obrador.

"This drop has been the result of several factors, among the main ones a high tax burden has not allowed the company to reach the investment levels necessary to sustain, and even increase, its production capabilities," said the ministry.

The ministry will create a "special tax regime for projects using secondary and tertiary recovery" methods.