MethanQuest: Test Results In for Renewable Hydrogen, Methane as a Fuel

As the maritime industry embarks on 'the path to zero', it is widely acknowledged that there is currently not a 'silver bullet' solution, nor is it likely that a solution will emerge from a vaccum. Collaboration is the path forward, and efforts such as MethanQuest offer promise.

The project MethanQuest was launched in September 2018 with 29 partners from research, industry and the energy sector to work on processes for producing hydrogen and methane from renewables and for using them to achieve climate-neutral mobility and power generation. The project participants have now submitted their interim results. These relate to electrolysis systems for producing hydrogen, both on land and in offshore wind parks, equipment for producing methane, the use of gas engines in cars, ships and CHP plants, and concepts for energy systems that efficiently couple the transport, electrical power, gas and heating sectors. Common to all plant and processes is the integration of renewable energies.

“The energy revolution demands that we find innovative solutions for using renewables to make new fuels for mobility and power generation. So it's essential to identify future trends at an early stage and promote their development. This is why we began funding the MethanQuest research project in 2018, and its interim results already show very valuable findings,” said Norbert Brackmann, Member of the German Bundestag and Federal Government Coordinator for the maritime industry. The German Federal Ministry for Economic Affairs and Energy (BMWi) is providing some 19 million euros in funds to the MethanQuest project.

“Hydrogen and methane (e-methane) manufactured using renewable energy resources are set to play an important role in the future. The energy revolution will see power supply systems become increasingly dependent on flexible gas-fired power plants so that the fluctuations involved when using renewables can be compensated for. Furthermore, gas in LNG form is beginning to gain a foothold as a new marine fuel,” reported project coordinator Dr. Frank Graf from DVGW Research Center, part of the Engler Bunte Institute at the Karlsruhe Institute of Technology. 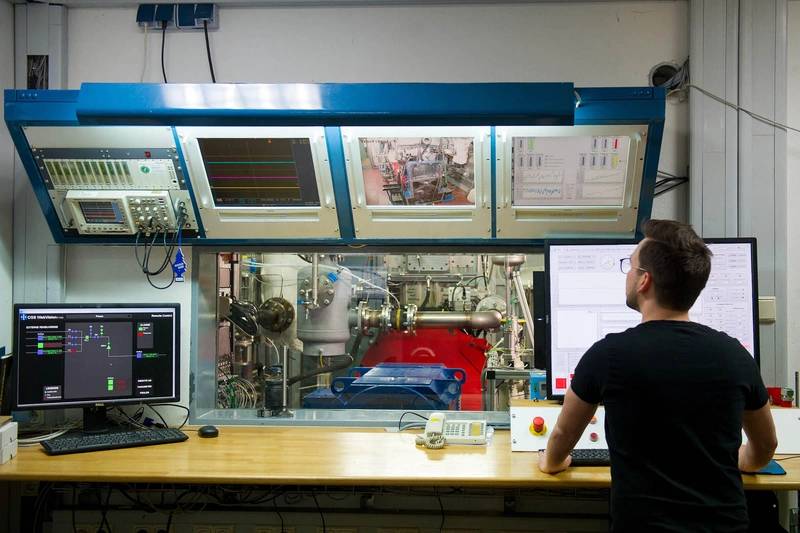 H2 One-cylinder Testbench: The MethanPower group, coordinated by Rolls-Royce Power Systems, are currently investigating a concept involving a large-sized innovative Otto engine fueled by hydrogen. Used in power generation, the aim is for this engine to achieve the power density of a natural gas engine with minimum emissions. The picture shows the test bench with the single-cylinder engine at the Technical University of Munich.  Photo courtesy Rolls-Royce Power System/MethanQuest

Six sub-projects are working on the numerous research projects of the MethanQuest project, which is being led by DVGW and the Rolls-Royce business unit Power Systems. The MethanFuel group is researching into new processes for manufacturing methane out of renewables. All the technologies involved – from water electrolysis to CO2 extraction and methanation – have been examined and enhanced.

AREVA H2Gen, in collaboration with its project partners Fraunhofer ISE und iGas energy, has developed an innovative PEM electrolysis system. PEM electrolysis, in which hydrogen is produced using electrical power generated from renewables, is the first step in the Power-to-Gas process. To enable hydrogen to be produced in offshore wind parks in high quantities in the future, the TU Berlin is looking into how seawater can be used directly for electrolysis without the need for prior desalination.

The process steps involved in turning hydrogen into e-methane were successfully demonstrated at DVGW and the Engler-Bunte-Institut, Teilinstitut Chemische Energieträger - Brennstofftechnologie (EBI ceb) of the Karlsruhe Institute of Technology. Firstly, a long-term experiment in pulling CO2 from the air was conducted. And a new plant has been put in place that is capable of producing 10m3 of pure methane per hour.

Testing of hydrogen, methanol and methane for use in ships, cars and power gen

In various sub-projects, the partners are also working on engines capable of combusting gas made from renewables highly efficiently without producing harmful by-products. A car engine powered by e-methane which was built under the leadership of Ford is currently being put through its paces. Coordinated by Rolls-Royce Power Systems, a large-sized innovative Otto gas engine fueled by hydrogen is also being tested. The researchers are delighted by the results so far – hydrogen combustion produces low levels of noxious emissions.

The MethanMare group aims to demonstrate how fuels made from renewables could support the energy revolution in the maritime sector. Research has found that with the use of catalyzers and an extremely complex technique for high-pressure gas injection, emissions from a methane-powered ship engine can be lowered by up to 80% compared with those of a conventional gas engine. It has also been shown that methanol combustion in large high-speed engines gives rise to low contaminant emissions and zero methane emissions.

Partners working on the MethanGrid sub-project have devised an e-methane storage and distribution system for Karlsruhe's Rhine port which can be used to provide ships and trucks with LNG. The system can also support the high-pressure gas network in Baden-Württemberg for peak load coverage. The researchers have also developed a complete locally coupled energy supply system to serve the port. This is a microgrid which couples all the current sectors i.e. electricity, gas, heating, transport and industry, enabling all the available energy, including renewables, to be optimally exploited. Finally, the partners are also examining how e-methane could be integrated into the whole of Germany's energy infrastructure.
“Partners of the MethanQuest project are highly satisfied with the results obtained so far. The further findings we make up until the autumn when the project ends will provide us with an all-round understanding of renewable methane – from the costs it involves and its feasibility up to its impact on the climate and environment,” explained project coordinator Dr Manuel Boog, who works in technology development at Rolls-Royce Power Systems.

E-methane can be produced using electricity made from renewable sources – otherwise known as the 'Power-to-Gas' process. E-methane is simple to store and use at a later date, thereby facilitating a CO2-neutral energy cycle. The basic principle is as follows: Renewable energy sources such as wind or solar are used to generate electrical power. In the electrolysis process, this electrical power is used to break down water into its components (hydrogen and oxygen). Using the hydrogen, and carbon-dioxide from the air (CO2-extraction) or from biomass, plus further energy input, other synthetic fuels such as e-methane, e-diesel and e-methanol can be manufactured. 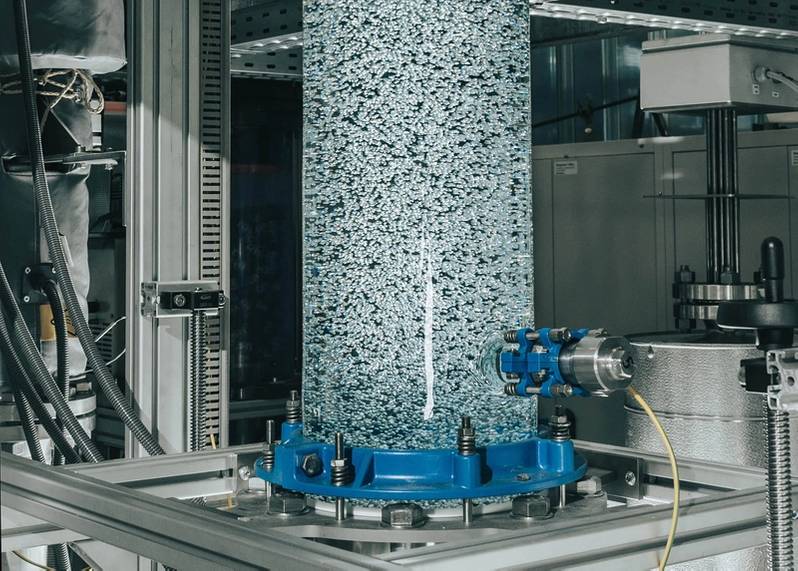 The step from hydrogen to renewable methane has been successfully demonstrated by the MethanQuest partners Institut EBI ceb at KIT and DVGW: The plant for catalytic methanation in a bubble column reactor produces approximately 10 m3/h of high-purity methane and shows very good dynamic load behavior. Photo courtesy Rolls-Royce Power System/MethanQuest