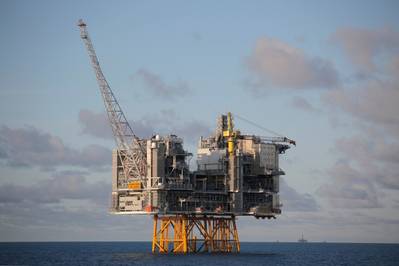 Earnings before interest, tax, depreciation and amortisation (EBITDA) fell to $411 million in the third quarter from $504 million a year earlier as crude prices declined, beating a mean estimate of $378 million in a Refinitiv poll.

The company's shares hit an all-time high in early trade but later pulled back to trade down 2.9% by 1000 GMT as investors pocketed recent gains amid a broad decline in energy stocks.

"Yes, it is possible," Chief Executive Alex Schneiter told analysts on a call, when asked about reaching the production target earlier.

Sverdrup, in which Lundin holds a 20% stake, started operating on Oct. 5, about a month earlier than previously expected, and is already producing more than 200,000 boepd.

Schneiter said he expected the field to reach 80% of its Phase 1 capacity by the end of November, with a new production well to be drilled towards the end of December.

Lundin also reduced its 2019 capital spending target to $730 million from $785 million after pushing some project development costs into 2020 and making savings from a weaker Norwegian crown.

The company lifted proven and probable reserve estimates for its Edvard Grieg field to over 300 million barrels of oil equivalent after approving a new infill drilling program in 2020, compared to original estimate of 186 million boe.

The oil company said it has decided to invest around $60 million in a hydropower project in Norway over 2019-2021, partly to hedge against price fluctuations in the Nordic power market.

Lundin reported free cash flow of $1.1 billion during the first nine months of this year or $3.4 per share, including the cash flow from the sale of a 2.6% stake in Sverdrup to Equinor.