For the first time, U.S. and Middle East volumes were equal, said the owner and operator of modern very large gas carriers (VLGCs).

"Our expectation is that the U.S. exports will grow faster than those from the Middle East. U.S. propane inventories continue to push towards the higher-end of their 5-year range, having reached 80 million barrels on July 26th, 21.4% higher than last year, which was almost equal to the percentage increase in exports," it said.

North American export capacity continues to expand, further supporting global LPG trade. Altagas' new Ridley Island terminal on the west coast of Canada is now exporting two cargoes per month, while Enterprise expects its LPG Marine Terminal expansion to be ready by the end of September 2019 followed by an even more substantial expansion by the third calendar quarter of 2020.

Targa Resources announced an expansion project of 200 million barrels per day by next year, while Energy Transfer Partners announced scheduling changes for this summer to facilitate vessel loadings and increased refrigeration capacity for their Nederland terminal by September 2020. Sunoco's Marcus Hook terminal has maintained a strong loading schedule, exporting 9 VLGC cargoes in April, 10 in May, and 9 in June.

In April 2019, European and Asian benchmark propane prices climbed, while Mont Belvieu prices fell. Throughout the quarter, prices continued to fall in all three major regions, dropping below 50% of Brent in Northwestern Europe and the Far East.  Despite a fall in crude prices and naphtha, propane remained a key feedstock for the petrochemical industry in the West as the propane-naphtha spread averaged around $130 per metric ton over the quarter.

In China, several new PDH plants are anticipated to start up in the second half of 2019 with potential LPG demand of 700,000 tons per annum per facility. In South Korea several steam crackers were down for maintenance at the beginning of the second calendar quarter of 2019, limiting import demand. However, with several cracker expansions, propane consumption in Korean steam crackers is similarly expected to rise in the latter half of the year.

MethanQuest: Test Results In for Renewable Hydrogen, Methane as a Fuel 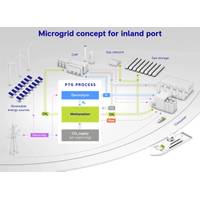 As the maritime industry embarks on 'the path to zero', it is widely acknowledged that there is currently not a 'silver bullet' solution…