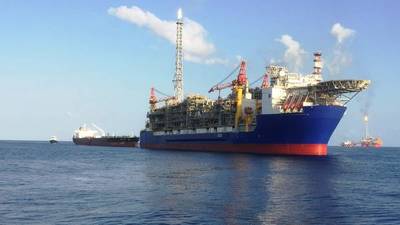 Inpex Corp, Japan's top oil and gas company, on Tuesday cut its annual net profit forecast by 93% after first-quarter earnings slumped due to an oil price collapse and as the coronavirus pandemic choked off international energy demand.

The group also warned it is re-evaluating all of its assets and may book impairment losses on some depending on the oil price outlook and a review of project plans.

It will make an announcement on that once it has determined any financial impact, it said.

Inpex is now predicting a net profit of 10 billion yen ($93 million) for this calendar year, against its February estimate of 145 billion yen. It also cut its annual dividend forecast to 24 yen a share from 36 yen.

The revised forecast is based on an assumption of an average Brent oil price of $35.2 a barrel this year, down from its earlier assumption of $60, it said in a statement.

For the January-March quarter, net profit fell 32% to 33.6 billion yen from a year earlier, hit by a plunge in oil prices.

Inpex said it plans to shore up cash flow in the face of the oil price drop by cutting development spending by over 20% and exploration investment by over 40% from its February plans.

The company has already secured liquidity in the form of cash and a credit line from banks, but plans to seek further bank loans to stabilize its financial base, it said.

Oil and gas companies across the world are cutting spending as stringent travel restrictions to contain the virus have drastically reduced fuel consumption, and amid a crude oil glut.

International benchmark oil prices have more than halved so far this year.