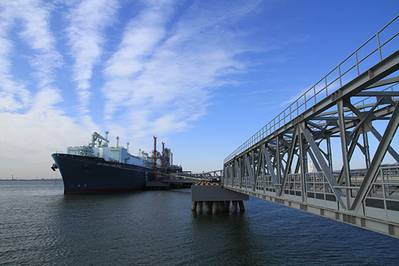 Norway's Hoegh LNG has won a tender to supply a floating LNG import terminal for a consortium aiming to import liquefied natural gas to Australia's east coast from 2020 in a push to boost local supply.

Australian Industrial Energy, a consortium that includes Japan's JERA and Marubeni Corp, said on Monday it signed an agreement giving it the right to lease one of Hoegh LNG's floating storage and regasification units (FSRU), to be docked at Port Kembla.

The project needs approvals from the state of New South Wales, which is evaluating the proposal on a fast track as "critical state significant infrastructure", amid pressure to drive down gas prices.

"We remain on schedule to deliver gas to our industrial customers during early 2020," Australian Industrial Energy (AIE) Chief Executive James Baulderstone said in a statement.

Wholesale gas prices have nearly tripled over the past two years following the opening of three LNG export plants on Australia's east coast that have sucked gas out of the domestic market.

ExxonMobil Corp, the dominant gas supplier to the southeastern market over the past several decades from gas fields in the Bass Strait, and a private firm are also considering importing LNG from around 2021 or 2022.

The gas import projects are moving ahead as politicians wrangle over an energy policy that was meant to end a decade of climate wars but looks set to fall apart amid leadership tension ahead of a federal election.