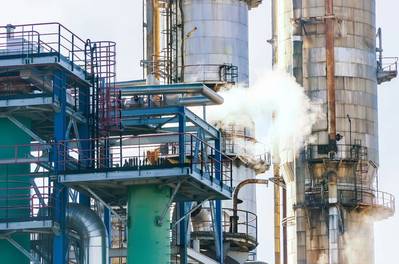 U.S. refiners could face a continued squeeze on profit margins in the months ahead as dwindling supplies of heavy crude from Venezuela and elsewhere are leading several to switch to higher-priced but easier-to-refine light, sweet crude.
The shift also could mean higher prices for consumers in the last weeks of the summer driving season and into the fall if refiners are able to pass along those higher costs to drivers, analysts said.
PBF Energy Inc, Valero Energy Corp, Phillips 66 (PSX) and Marathon Petroleum Corp said in earning calls over the past two weeks they are running more light crude as a result of narrower discounts for heavy crude. ExxonMobil Corp also is running a heavier slate of light crude at a Gulf Coast plant.
Refiners' "margins have already been heavily impacted," said John Auers, executive vice president at refining consultancy Turner, Mason & Co. "They will be impacted in the third quarter" as well, Auers said. The final period's outlook could depend on whether the U.S. applies sanctions on Venezuelan imports, he added.
In part, the companies are reacting to high costs and anticipating weaker supplies of Venezuelan crude coming to the United States. Heavy crude prices also have been impacted by tax changes in Russia that have raised prices of its heavy crudes and by reduced production from Canada last quarter.
Through June, U.S. imports of Venezuelan crude declined 7.1 percent compared with the same six month period last year, to 654,078 barrels per day (bpd), according to Reuters data.
Light, sweet crude costs more than heavier oils, narrowing the discount that U.S. refiners, especially those along the Gulf Coast, have gained by configuring their plants to run heavy, sour crude over the past 20 years.
Marathon's second-quarter income from its refining and marketing operations fell in part due to "unfavorable crude oil and feedstock acquisition costs, primarily due to lower sweet/sour crude oil price differentials," the company said on Thursday.
PBF also said narrower heavy crude discounts contributed to its second quarter loss of $1.01 a share, compared to Wall Street expectations of a 2-cent a share gain.
Exxon is studying adding a light crude-processing unit at its Beaumont, Texas, refinery early in the next decade, spokeswoman Charlotte Huffaker said this week. It would be the second light-crude processing unit at the plant.
"These investments reflect the increased availability of abundant, affordable supplies of U.S. light crude," Huffaker said in an email.
Valero and Phillips beat analysts' estimates, Valero by 13 cents at $1.23 a share and Phillips by 5 cents at $1.06 a share.
Other factors could balance the higher crude cost in the coming months, such as strong global demand for U.S. refined products, said Andrew Lipow, president of Lipow Oil Associates in Houston.
"Prices are going up because we're seeing the impact of the cuts by OPEC and non-OPEC countries," Lipow said.
Neil Earnest, president of Dallas energy consultancy Muse, Stancil & Co, said changes in the price of crude could also affects refiners' margins ahead.
"They don't move in lockstep," Earnest said. "It may, however, impact a refiner who has customized a process to run heavy crude. That refiner may see narrower margins."
(By Erwin Seba; Reporting by Erwin Seba; Additional reporting by Jarrett Renshaw and Devika Krishna Kumar; Editing by Gary McWilliams and Lisa Shumaker)
Email