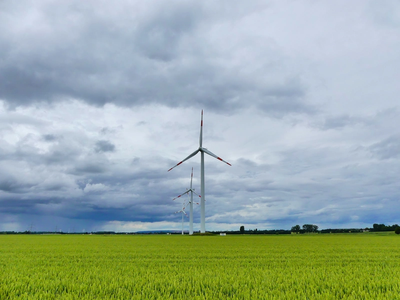 Germany's network regulator agreed to pay higher prices for onshore wind power in its latest capacity auction, it said on Tuesday, reflecting a new set of rules that made it harder for citizens' co-operatives to compete.
The average price Bundesnetzagentur (BnetzA) awarded for onshore wind projects came in at 4.6 euro cents per kilowatt hour (kWh), up from the 3.8 euro cents per kWh it agreed to in its last auction in November.
Shares in Denmark's Vestas, the world's largest maker of wind turbines, were 3.8 percent higher after the news, which signals a temporary halt to relentless price pressure that has dominated the industry for years.
Smaller peers Siemens Gamesa and Nordex (NDX1.HA) were up 2.3 and 3.9 percent, respectively.
In the past, BnetzA's auctions had favoured co-operatives over big commercial players to raise acceptance for wind power technology, often the subject of controversy in affected regions, within local communities.
BnetzA said it had accepted 83 bids for a combined volume of 709 megawatts (MW), with small and medium-sized businesses among the winners, including Germany's Enercon, the world's fifth-largest wind turbine maker.
In total, 132 bids were submitted with a total capacity of 989 MW.
Reporting by Christoph Steitz and Jacob Gronholt-Pedersen
Email