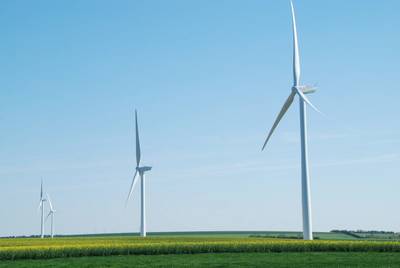 France installed 330 megawatt (MW) of renewable wind power capacity in the first quarter of 2017, the biggest increase in any first quarter, taking total French wind power capacity to over 12 gigawatts (GW), the Ecology Ministry said in a report.
The increase in capacity was boosted by new projects which were connected to the grid during the quarter, boosting French electricity output from wind turbines to about 6.9 terawatt-hour (TWh) in the quarter, or about 4.8 percent of French demand.
France depends for more than 76 percent of its power generation on 58 nuclear reactors operated by state-controlled utility EDF, but a 2015 energy law plans to curb that dependence on nuclear to 50 percent of the energy mix by 2025.
The quarterly report said 34 new wind projects were installed in the first quarter, compared with 18 in the year-earlier period.
On-shore wind power projects in the pipeline represent a total capacity of over 8 GW, of which 2.5 GW have a signed connection agreement, the ministry said, adding that another 3 GW of off-shore wind projects were also under construction.
France would need to ramp up the completion of wind power projects to meet its target of 15 GW capacity by end-2018.
Newly elected President Emmanuel Macron said in February he planned to launch tenders for 26 GW of renewable energy capacity at the beginning of his mandate.
The ministry also said France added 78 MW of solar power capacity in the quarter compared with 183 MW in the same period a year ago, taking installed French solar capacity to 7.2 GW.
Solar panels provided 1.4 TWh of electricity in France in the three months to March 31 2017, representing about 1 percent of consumption.
Signed solar projects in waiting to be connected to the electricity grid rose sharply in the quarter by 53 percent to reach 944 MW.
(Reporting by Bate Felix)
Email