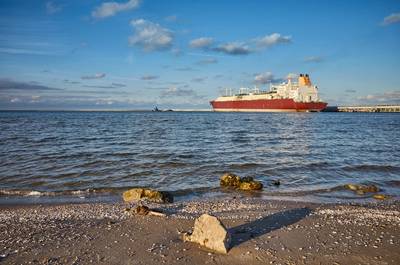 This represents the largest ever increase in production.

While East Asian, especially Chinese, demand increased in 2017 and 2018 to absorb additional production, there was little change this year. Instead, supply pushed into Europe reached a record high, having a major impact on regional hub pricing with price correlations growing between Europe and Asia.

Qatar wins out
In the battle for top exporter, Qatar held onto first place, producing 77.4 million tonnes, according to the provisional LNG Edge data. 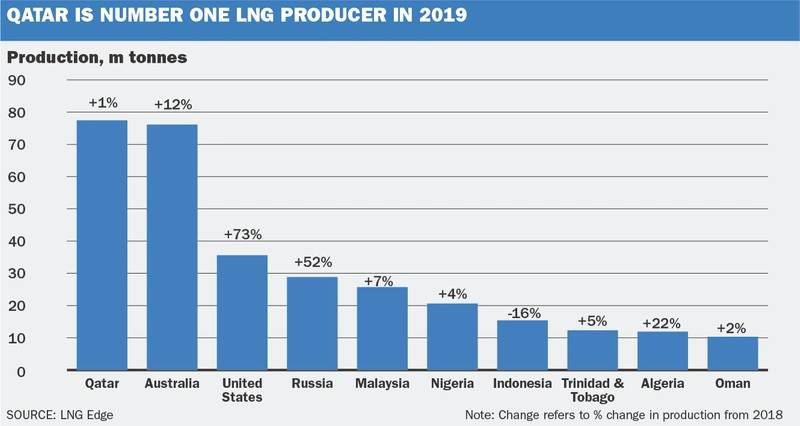 This was very close to nameplate capacity.

Australia came in a close second, at 76.1 million tonnes, a rise of over 8 million tonnes and should take top spot in 2020, based on the LNG Edge supply forecast.

Of the 40 million tonne increase in supply, the majority – 33 million tonnes – came from Australia, Russia and the US.

Russian production rates at Yamal and Sakhalin were especially impressive in 2019.

But US LNG took center stage, with 35.6 million tonnes produced, up by almost 15 million tonnes year-on-year. The increase will continue next year with the US set to produce almost 57 million tonnes, according to the LNG Edge supply forecast. Much will depend on the successful ramp-ups of remaining new trains at Freeport and Cameron LNG.

Production from several of the more mature producers was higher too in 2019.

Algerian and Egyptian exports both rose by more than 2 million tonnes, with Egypt producing 3.5 million tonnes as its domestic gas supply continued to improve.

Malaysian production improved substantially from 2018 when feedgas issues reduced operating rates, with a similar story from Papua New Guinea where production recovered after the drop in 2018 caused by a nearby earthquake.

Europe to the fore
European LNG imports rose close to 76 million tonnes in 2019, by far the highest ever recorded, according to the provisional data. 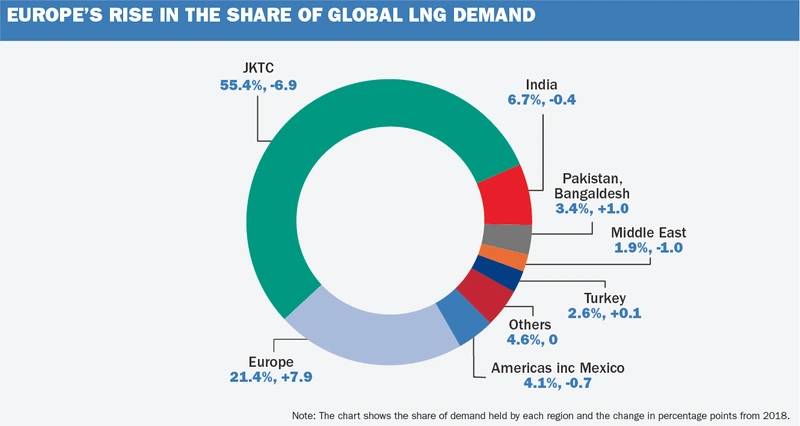 LNG sellers used the European market to absorb the global oversupply with a rise in spot sales and portfolio sellers bringing more cargoes into their own European terminal positions.

Among the list of records was the 8 million tonnes imported by Europe in December, the highest on record, with the UK importing more than 2 million tonnes.

Europe absorbed over 21% of all LNG produced globally in 2019, up from 13% in 2018 in what was by far the most significant change across all regions.

This trend of higher European imports will likely continue in 2020 unless there is a major shift in short-term demand in Asia over the rest of the winter and the following summer.

The volume of LNG coming to Europe pushed down traded hub prices and supported storage injection over the summer, putting the market in good shape as the winter began.

Sharp import increases were recorded across most European countries, with Dutch and Belgian imports both more than doubling.

Qatar pushed a lot more LNG into European markets, especially the UK, with more from the US and Russia too.

East Asia in decline
In a major reversal from the preceding two years, total East Asian LNG imports fell in 2019 year-on-year, with weakness from Japan and South Korea.

Combined imports into those two countries, China and Taiwan stood at 196.5 million tonnes, still by far the most significant importing area. But this figure was down by around 1 million tonnes from 2018.

In both 2017 and 2018 the region’s imports rose by around 20 million tonnes which helped to absorb a large portion of rising global supply.

Utilization at a number of China’s key import terminals was very high, with others still lacking sufficient linkage to the grid to support larger send-out.

How China’s new independent gas pipeline and infrastructure operator develops in 2020 will be an important factor in the evolution of LNG imports and the ability that new companies have to take import positions.

South Asia evolves
Beyond East Asia and Europe, south and southeast Asia are the two key import regions that sellers are focusing on. There is substantial gas demand in the region, at the right price, but progress to open up new markets has been slow in recent years.

The growth in Indian imports is restricted by the lack of new available infrastructure, but demand did rise by over 1 million tonnes to 23.8 million tonnes in 2019.

The addition of more import capacity in 2020 could boost Indian imports to over 26 million tonnes, according to the LNG Edge demand forecast.

Middle East, Americas
Rising domestic gas production and competing power generation meant that LNG imports into the Middle East and Americas both fell in 2019, despite the oversupply and low spot prices.

While Brazilian LNG imports held up well, demand from both Argentina and Mexico fell.

The Middle East absorbed 1.9% of global supply, down from 2.9% in 2018, largely a result of Egypt stepping away from imports.

But while Kuwait will continue as the most significant importer in the region – especially with the start of Al-Zour terminal due for 2021, Jordanian imports fell by half.

This came just as the first Israeli pipe gas from the Leviathan gas field arrived in Jordan at the end of the year.