With greenfield investments in Nigeria, Egypt, Mozambique and elsewhere reaching nearly $103 billion this year, it is clear that liquefaction is viewed as the most profitable strategy for realizing Africa’s gas potential, said Gas Exporting Countries Forum (GECF).Africa is an exciting frontier in the global natural gas sector. The continent holds 7.1 percent of proven global… 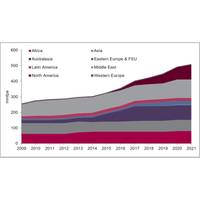 The production of LNG in recent years has increased dramatically. According to Westwood Global Energy data, LNG liquefaction capacity increased from 121 million tons per annum (mmtpa) in 2000 to nearly 270 mmtpa in 2010, and will reach just over 400 mmtpa by the end of 2017. A wave of ‘mega-projects’, each costing tens of billions of dollars, have been completed in the Middle East and Australasia over this time.

Venezuela's exports of petroleum coke, derived from the country's heavy oil, have been halted at its Petrosanfelix terminal since last week due to a burning cargo on a ship, according to a source and documents seen by Reuters on Friday. The bulk carrier Top Trader was receiving the load from state-run PDVSA when burning petroleum coke was noticed in three of its containers, according to the source and written communication between the vessel's captain…

Shell Petroleum Development Company has declared force majeure (FM) on gas supplies to the Nigeria Liquefied Natural Gas (LNG) export facility on Bonny Island, a spokeswoman said. "The Shell Petroleum Development Company of Nigeria Ltd (SPDC) declared force majeure on gas supply to NLNG on 8 August 2016, following a leak on the Eastern Gas Gathering System (EGGS-1) pipeline through which it supplies the bulk of its gas to NLNG…

Portugal's Galp Energia is holding a tender to sell four to six Nigerian liquefied natural gas (LNG) cargoes annually over five years, trade sources said. Galp is a long-term buyer from the Nigerian LNG export project on Bonny Island, and has regularly sought to offload supply onto the spot market in recent years. One of the sources said the tender could be awarded at the end of the month.

Asian liquefied natural gas (LNG) prices were steady this week amid limited trading activity. The price of Asian spot cargoes for February delivery was pegged at $6.90 per million British thermal units (mmBtu), in line with the previous week. Traders eyed developments in Nigeria where Eni has declared force majeure on loadings from the country's LNG export plant due to pipeline sabotage. 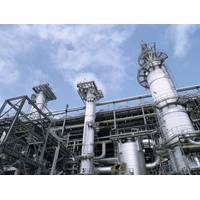 Shell on Friday said gas supplies to Nigeria's LNG export terminal on Bonny Island had been reduced due to the shutdown of a major oil pipeline in the country caused by a leak and theft. The reduction may impact liquefied natural gas exports from the facility. Shell's Nigerian unit, Shell Petroleum Development Company (SPDC), on Thursday declared force majeure on crude oil exports via two major pipelines, including the Trans Nigera Pipeline (TNP).

Asian liquefied natural gas (LNG) spot prices for September delivery were firm this week, supported by supply issues in Nigeria after a pipeline leak, though surplus global supplies helped ease concerns. The price of Asian spot cargoes held steady at around $8.00 per million British thermal units (mmBtu), from $7.95/mmBtu last week. Shell confirmed on Thursday that it had declared…

Shell declared force majeure on gas supplies to Nigeria's LNG export terminal on Bonny Island in Rivers State due to a pipeline leak, a spokesman for the company said on Thursday. "Shell declared force majeure on gas supplies from SPDC to NLNG (Nigeria Liquefied Natural Gas Co), effective August 4," spokesman Precious Okolobo said, adding that the company was still investigating the cause of the leak.

Asian spot liquefied natural gas prices lagged behind Europe, where prices are at a premium, raising expectations that Qatar will send more cargoes to European shores amid scarce demand elsewhere. The price of Asian spot LNG for delivery in March fell to around $6.70 per million British thermal units (mmBtu) this week, 20 cents below last week levels. Prices of cargoes for April delivery…

Gas Tanker Reportedly Aground off Nigeria

A liquefied natural gas (LNG) tanker has run aground off Nigeria after taking on a cargo at the country's Bonny Island export plant, two trading sources said. The 165,000-cubic-metre-capacity Magellan Spirit tanker, owned by Teekay LNG Partners, ran aground trying to leave the port bound for South Korea, traders said. Teekay could not be reached for immediate comment. A trader…

Asian spot liquefied natural gas (LNG) prices were little changed for January delivery as trade stayed thin and demand weak, tilting more supply towards Europe. The spot price <LNG-AS> for January remained around $9.50 per million British thermal units (mmBtu) on Friday, while prices for February were just 20 cents higher. At those levels it is more profitable to send cargoes produced in the Atlantic Basin to Europe instead of to Asia, traders said.

Niger Delta fishermen are no strangers to seeing oil spill into their waters from leaky pipelines, but even they were shocked by the scale of the slick stretching for miles from a Shell facility across the swamps and into the ocean. Some 3,800 barrels spilled, according to an investigation by Shell and government officials. It ranks as one of the worst in Nigeria for years, local environmental activists said. Shell said the spill was caused by a failed crude theft.