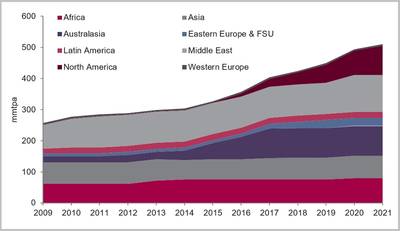 The production of LNG in recent years has increased dramatically.
According to Westwood Global Energy data, LNG liquefaction capacity increased from 121 million tons per annum (mmtpa) in 2000 to nearly 270 mmtpa in 2010, and will reach just over 400 mmtpa by the end of 2017. A wave of ‘mega-projects’, each costing tens of billions of dollars, have been completed in the Middle East and Australasia over this time. With depressed spot prices and further capacity due to come onstream, the outlook for the sector appeared grim. However, there are now signs that the market may start to correct through a supply-side response.
Over the last decade, substantial growth in LNG export capacity has been driven by abundant supplies from both conventional and unconventional sources, combined with expectations of booming natural gas demand, as switching occurs from nuclear and coal. In addition to the projects in Qatar and Australia, we have seen the US become a natural gas exporter to customers in Europe, Latin America, Asia, and even MENA over the last 12 months. The US unconventional boom has increased the domestic natural gas supply significantly, prompting the US to convert some of the LNG terminals originally designed for gas imports into export terminals.
The US’ competitive advantage relative to other LNG export geographies are: (i) abundant natural gas reserves (and substantial volumes of ‘associated gas’ produced as a by-product of tight oil extraction), (ii) the ability to produce these reserves at highly economical wellhead prices, (iii) the presence of a liquid and transparent gas trading market (i.e. Henry Hub), and (iv) less capital intensive brownfield LNG export infrastructure, predominantly along the US Gulf Coast (PADD 3). All of these factors contribute towards US LNG cargoes being very competitive in global markets.
Elsewhere, however, cuts in upstream expenditure, project delays, and technical issues all have been impacting production rates and some LNG terminals are faced with gas supply shortages. The LNG terminal at Point Fortin in Trinidad & Tobago has reported a 30% shortage in 2016 and expects a 35% shortage in 2017, equivalent to some 75 cargoes. The Egyptian LNG plant continues to struggle after many years of declining production, and in 2015 Egypt became a net importer of gas.
Technical issues at the Gorgon project in Western Australia have caused a number of production interruptions since starting up in March 2016, and this week Chevron (CVX) announced that Train 2 would be suspended to allow modification works to be undertaken to “enhance reliability.” The Nigeria LNG plant at Bonny Island has suffered from problems with pipeline infrastructure including an explosion in February this year.
Whilst oil prices have recovered through direct intervention from a cartel of producers, the gas market has been left to market forces to re-balance. In the last 12 months, oil prices (WTI) have recovered by 43% from $35 (1st April 2016) to $50 (31st March 2017). Gas prices (Henry Hub spot) have, however, bounced back by 56% from $1.88 $/mmbtu (1st April 2016) to $2.94 (27th March 2017).
The market remains precariously balanced. Further additions to supply are expected from projects sanctioned prior to the downturn, with many of these in USA. Last week, Cheniere announced the completion of Train 3 of its US Sabine Pass project, which will add 4.5mmtpa to the existing 9mmtpa capacity, and Train 4 is reportedly in the commissioning process. Overall, DW expects to see 90mmpta of capacity added globally between 2018 and 2020. Recent supply interruptions may, therefore, prove to be only a temporary respite as current demand forecasts suggest an oversupply of LNG will persist throughout the balance of this decade.
Email