Last year marked the beginning of the United Nations Decade of Ocean Science for Sustainable Development, lasting from 2021 until 2030. With 10 years comes 10 challenges—goals for regional, national and global participants to work towards for positive, collective impact on our oceans. Included in the 10 are ocean-based solutions for climate change, expanding the Global Ocean Observing System, creating a digital representation of the sea, and access to data and technology across all marine stakeholders. These and others on the list depend on collecting increasingly more ocean data. While technology to monitor marine systems is rapidly adapting and expanding, it surfaces new issues such as offshore energy generation and storage to support sensors, operating equipment, subsea vehicles and wind farms.

What’s necessary, therefore, is a way to not only store energy onsite underwater, but to also replenish those systems in a renewable and sustainable way — TE Connectivity, a multi-industry connector and sensor engineering company, points to grid stability and compensating for times of low production. Different power sources added to the grid can cause fluctuation and having power available, short-term, can help compensate. In times of low power production — when the sun isn’t out or the wind is calm, energy storage is crucial to meet demands. Across the industry, technology companies and research institutes are racing to fill the gaps, providing solutions from offshore power systems to underwater batteries.

Underwater energy storage can be likened to the recent boom in electric vehicles (EVs), according to Reenst Lesemann, the CEO of C-Power. EVs have been a compelling alternative for years, but if owners were limited to only charging their cars in their garages, they would never reap the full benefits of the technology.

“The same can be said at sea. It’s not enough to have the best electric ship. Underwater vehicles, surface vessels, operating equipment and data sensors at sea need that electricity to be delivered to them when they need it and how they need it. That means there needs to be a network of charging stations, such as C-Power’s Autonomous Offshore Power Systems (AOPS) that can enable those systems to be truly autonomous, connected and resident,” he said.

There are two primary uses for energy storage in marine environments, said Lesemann. The first is utility-scale renewables, like wind and wave energy, that connect to terrestrial electric grids. Storage is needed to save energy when produced in excess so that it can be delivered during periods of peak demand. At the low-power end of the spectrum are the systems that require in-situ energy. “Today, the ocean is a power desert. There are no resident sources of renewable energy generation or storage for the ocean economy. To operate equipment, sensors, underwater vehicles or unmanned surface vessels at sea, it currently requires people-, capital- and carbon-intensive solutions such as sending manned vessels to recharge systems from diesel-fueled generators.”

C-Power’s solution is AOPS—a series of systems to capture available wave energy and deliver it as electricity to batteries or storage units. The system further connects the sea to the cloud, granting the ability to upload and download data with ease. Specifically, its SeaRAY AOPS is “a moored configuration consisting of a surface wave power system; a single, combined mooring, data, communications and power cable; and a seafloor base unit that provides 55 kWh of energy storage for payload operation.” Altogether, C-Power aims to advance the marine economy through the realization of autonomous, connected and resident technologies.

The SeaRAY will also soon participate in a demonstration in partnership with the U.S. Navy and the Department of Energy in Hawai’i. The energy storage unit to be used will be a Halo underwater battery provided by Verlume, a provider of energy management and storage technologies. The AOPS will be deployed from the Navy’s Wave Energy Test Site, and its generation and storage capabilities will support several technologies, including data sensors and a Saab Sabertooth autonomous underwater vehicle.

The first commercially sold SeaRAY AOPS, nicknamed the TigerRAY, went in the water this spring, where its owners tested its capabilities on Lake Washington near Seattle. © C-Power

Also tackling renewable underwater energy is the International Institute for Applied Systems Analysis (IIASA), a research body that aims, among many things, to enhance the resilience of natural systems and achieve the UN Sustainable Development Goals. The challenges poised by underwater energy production and storage include increasing pressure at depth—but IIASA sees this as an opportunity to be harnessed instead. Research scholar Julian David Hunt explained the Buoyancy Energy Storage Technology (BEST), which can be used to store intermittent energy.
The concept is based on pumped energy storage systems, which usually consist of floating platforms near wind farms and a motor/generator on the sea floor. “BEST consists of anchoring a cube made of a series of segmented pipelines with air or hydrogen inside to the deep sea (between 3,000 to 6,000 meters deep),” Hunt explained. “The buoyancy force pushes the cube upwards to the surface, but cables attached to the bottom holds it in place. The cube moves up and down slowly (with speeds of 0.1 m/s to increase overall efficiency), storing energy by isothermally compressing the gas inside the pipelines. The motor/generator pulls the cube to the bottom of the sea as it stores energy and controls the ascend of the cube as it generates electricity.”

Inspiration from this work comes from Hunt’s background—he’s been working with hydropower for more than a decade and with gravity energy storage for more than five years. “An important variable for estimating the electricity potential of these technologies is the height difference between the upper and lower storage sites. After brainstorming practical locations that have a high height difference, I thought of the deep sea,” he said.

Underwater energy capacities don’t end there—many companies are working to create the batteries and storage systems necessary for these larger systems to run. Ocean Grazer, a Dutch startup incubated by the University of Groningen, is piloting the Ocean Battery, a modular solution for utility-scale storage, according to their website. The Battery is a pumped hydro system, based on dam technology. To store energy, the system pumps water to be stored under high pressure as potential energy. As demand for power increases, the water flows into low-pressure reservoirs, turning turbines to generate electricity. On top of the Ocean Battery, Ocean Grazer also boasts Ocean Energy Consultancy for renewable offshore energy solutions and Ocean Power, which converts waves into electricity.

Another player in this market is Seatrec, whose technology can harvest energy from differing ocean temperatures. According to the company’s website, many substances expand as they’re heated and change phase, also known as Phase Change Materials (PCMs). PCMs are often used to release or absorb energy. In the warming phase, these substances transition from solid to liquid and change volume while in transition, moving a motor through pressurized fluid to convert hydraulic energy into electricity. 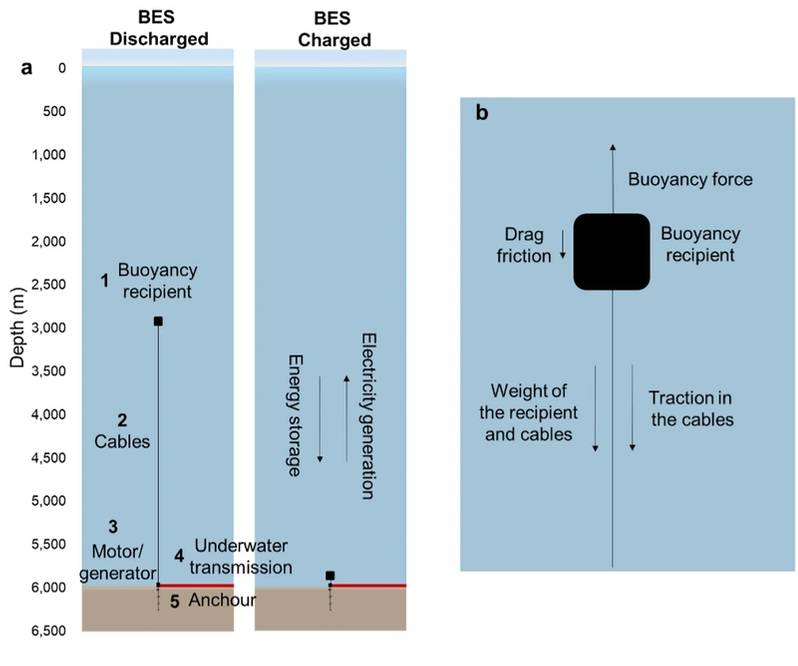 Although the future of offshore and underwater renewables and energy storage isn’t quite as clear as other parts of the marine industry, abundant technological development and advancement portend an exciting era to come. And that’s just as well, given that ocean energy systems have their fair share of catching up to do compared with terrestrial ones.

“There are more than 35 billion connected devices creating an Internet of Things on land. There are fewer than 10,000 in the ocean. Why is that?” Lesemann posed. “We all know the ocean is a difficult, expensive and complex work environment. Every time you want to do anything, you have to take people and power offshore. This begs for autonomous solutions; it begs for the Internet of Ocean Things.” The ocean, unsurprisingly, is a power desert. Where there is no power, there’s no energy or data. C-Power believes that once power is supplied to the seas, everything else will fall into line: “All of the trends toward digitization, AI, robotics and electrification that have proliferated on land and driven huge value to economy the economy will finally take hold at sea.”

IIASA’s BEST technology is attacking the ocean desert from two other angles: innovative and affordable energy storage (BEST claims an installed capacity of $50-100/kW as opposed to more pricey batteries) and an alternative option to compress hydrogen to be stored long term and transported through deep-sea pipelines. “The deep ocean will play an integral part in the future of renewable energy,” Hunt explained. “Its role will include generating tidal and wave power, energy storage with BEST systems, transporting hydrogen between continents, and providing cooling services in coastal areas.”

The 10 goals presented as part of the Decade of Ocean Science for Sustainable Development are widescale and all-inclusive—they’re challenges that cannot be completed in isolation or rapidly. Their success heavily relies on increased and enduring ocean research, technology and exploration. While initial efforts to increase and advance these activities are underway, the ocean remains without easy, affordable, widespread and sustainable power. Until renewable energy can be stored underwater and self-sufficient systems ensured, these goals remain more lofty than attainable. However, if the EV industry is any indication for how ideation, innovation, maturation and adoption can be accelerated, then it’s only a matter of time until this blue desert gets flooded with power.