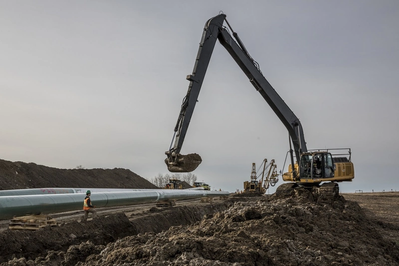 Enbridge Inc said on Friday it had completed 40 percent of replacement work on its massive Line 3 pipeline and reported a better-than-expected quarterly profit by reining in costs.

Canada's largest pipeline operator won a key approval in June to replace the 1,031-mile (1,660-km) long pipeline, which began service in 1968 and operates at half its capacity.

A replacement would allow the pipeline, which runs from Alberta in western Canada to Wisconsin in the United States, to return to approved capacity of 760,000 barrels per day.

The company also reaffirmed that Line 3 is expected to be in service in the second half of 2019.

Shares of the Calgary-based company were up about 2 percent in New York, while they rose 1 percent in Toronto.

"With that project moving forward, we have higher confidence in the company's growth outlook for cash flow and dividends," said Edward Jones analyst Jennifer Rowland.

Western Canadian oil producers have pinned their hopes on the pipeline seen as crucial for ramping up crude supplies.

Like TransCanada Corp, which has been trying to build its Keystone XL oil pipeline project linking Canada's oil sands to U.S. refineries, Enbridge (ENB) has faced criticism from green groups.

Enbridge said it transported 2.64 million barrels per day (bpd) of crude oil on its Mainline system across Canada and the United States during the quarter, up from 2.45 million bpd in the year-ago quarter.