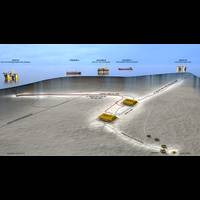 DNV GL has been selected by Wintershall Norge AS as the sole supplier for the combined role of Independent Verification Body (IVB) and Third Party Design Verification scope for the subsea, umbilicals, risers and flowlines (SURF) part of the Maria field development project.

The contract is expected to run until the end of 2018, with a value of potential $3.95 million.

Sture Angelsen , Business Development Manager in DNV GL, said, “We are delighted to be part of Wintershall’s first field development in Norway. By being able to deliver both the IVB and Third Party Design Verification, we are able to help streamline the project execution. Our aim is to ensure quality and contribute to a timely project execution and start-up, drawing on our broad technical expertise.

The IVB model will be used for verification of the safety critical elements, in addition to traditional third party verification of subsea production systems (SPS), pipelines, umbilical and risers. The IVB role covers all phases from design through commissioning, while the third party verification role covers design and options for involvement in the fabrication/-manufacturing/installation and commissioning phase.  “This approach to handling verification is well known in the UK sector, but less used in Norway,” adds Angelsen.

The Maria oil discovery is located in 300 to 350m of water in the Haltenbanken region of the Norwegian Sea. Maria will be developed using a subsea facility tied via rigid flowlines and flexible risers to Kristin with gas lift being supplied from Åsgard B via Tyrihans and sulphate reduced sea water supplied with injection pressure from Heidrun. The discovery is expected to produce around 188 million barrels of oil equivalent oil and gas. First oil is planned in Autumn 2018.