US Crude Sails to Asia as OPEC Weighs More Cuts 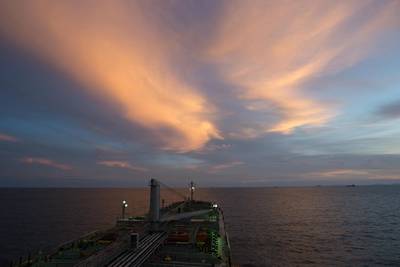 Oil tankers carrying around 10 million barrels of U.S. crude are en route to Asia, according to shipping data and trade sources, as U.S. producers take advantage of favorable prices to ship to the region while OPEC ponders further supply cuts next week.

At least eight tankers are in transit, sources said and the shipping data in Thomson Reuters Eikon showed, with one of them carrying the first ever cargo of Southern Green Canyon crude purchased by Japanese refiner Cosmo Energy. Another contains the first Alaskan North Slope cargo to arrive in Asia in eight months.
OPEC members meet next week to discuss extending a global supply cut, but the possibility of U.S. supply eating into their market share will be a challenge. While member countries have largely restrained their supply, they have remained intensely focused on keeping market share with Asian refiners. But relatively cheap U.S. crude has buoyed exports to Asia.
Traders expect that May U.S. crude exports could reach around 1 million barrels per day, with a sizable portion of that going to Asia. Last week, U.S. crude exports touched 1.09 million bpd, the third highest on record, according to U.S. government data. If numbers remain elevated, they could surpass the record 1.2 million bpd seen in February.
"We expect that momentum to continue when (Dakota Access Pipeline) opens and as more Permian production hits Corpus Christi docks," said Sandy Fielden, director of oil and products research at Morningstar, of the exports.
U.S. oil production has risen by 10 percent to 9.3 million bpd since mid-2016, according to the Energy Information Administration.
Attractive Arbitrage
Increasing traffic to Asia is possible because of a widening premium for Brent over U.S. crude, which touched a six-week high on Wednesday.
"Early May spot prices showed both Brent and Dubai trading at around a $3 per barrel premium to Brent and WTI Cushing, which is an open window," said Fielden.
Meanwhile, prompt Brent crude's premium to Dubai, also called the exchange of futures for swap <DUB-EFS-1M>, narrowed to below $1 a barrel last month, hitting 46 cents a barrel on April 27, its tightest since 2010.
That spread has been tightening since OPEC agreed to production cuts in November, making U.S. cargoes more competitive. An extension to OPEC cuts may further benefit U.S. producers and exporters.
The Sydney Spirit, a Bahamas-flagged Suezmax tanker chartered by P66, is delivering Alaskan North Slope (ANS) crude to Asia, according to two sources and Reuters vessel tracking data. Half of the crude onboard the vessel is unsold, one of the sources said.
Vessel tracking data available via the Eikon system lists the ship as "for orders," which indicates there may not be a buyer for at least some of the crude. The ship is currently on its way to Asia.
Meanwhile, Japanese refiner Cosmo Energy loaded the Aframax vessel Almi Star with around 300,000 barrels of Southern Green Canyon crude and Domestic Sweet Blend (DSW) outside of Houston, before picking up an additional 300,000 barrels of Maya crude at Dos Bocas, Mexico, two sources familiar with the matter said.
That ship will move through the Panama Canal, and then transfer crude to a larger Suezmax vessel loaded with 400,000 barrels of Mexican Maya crude for a voyage to Asia, the sources said.
P66 did not reply to an e-mail seeking comment, while Cosmo Energy declined to comment. All sources declined to be identified.
The Montesperanza, a Suezmax, is headed to Singapore after loading at the Galveston Offshore Lightering Area. The ship is controlled by French energy firm Total SA (TTFNF), and the crude on it is expected to go to Japan, two sources said.
Eikon data also shows 4 supertankers, so-called very large crude carriers (VLCCs) that are too big to pass through the Panama or Suez canals, carrying U.S. crude via the Atlantic and Indian Oceans to Singapore and China.
(Reporting by Liz Hampton and Catherine Ngai; Additional reporting by Osamu Tsukimori, Henning Gloystein and Florence Tan; Editing by Lisa Shumaker and Joseph Radford)
Email