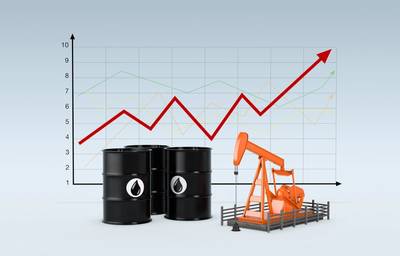 Oil highest in over 3 yrs on report Saudis want higher prices; nickel sees biggest jump in 6-1/2 years on sanctions worries.
Talk that Saudi Arabia has its sights on $80-$100 a barrel oil again and of more U.S. sanctions on Russia ignited a rally in commodities and resource stocks on Thursday, though the potential boost to inflation hit fixed-income assets.
It was set to be the strongest day for the commodity complex in eight months as Brent crude futures climbed past $74 a barrel after a near 3 percent jump overnight.
The surge came on a Reuters report that OPEC's new price hawk Saudi Arabia would be happy for crude to rise to $80 or even $100, a sign Riyadh will seek no changes to a supply-cutting deal even though the agreement's original target is now within sight.
The leap in oil combined with fears that sanctions on Russia could hit supplies of other commodities to light a fire under the entire sector. Nickel jumped the most in 6-1/2 years on talk Nornickel - the world's second-biggest producer of the metal - could be impacted.
Aluminium prices reached their highest since 2011, its raw material alumina touching an all-time peak before retreating when Russia floated the idea of a temporary nationalisation of sanctions-hit giant Rusal.
"It has been a very erratic day, it's a bit crazy," said Rabobank metals sector economist Casper Burgering. "Nickel went up by almost 10 pct and aluminium by almost 8 percent and now are coming right back down." Expect more volatility, he said.
Such increases, if sustained though, could fuel inflationary pressures and investors hedged by selling sovereign bonds.
Yields on U.S. two-year Treasuries stood at levels last visited in 2008 at 2.43 percent and 10-year German yields went above 0.57 percent for the first time in almost a month.
"Saudi Arabia wants higher oil prices and yes, probably for the IPO, but it isn't just that," an OPEC source told Reuters.
"Look at the economic reforms and projects they want to do, and the war in Yemen. How are they going to pay for all that? They need higher prices."
ENERGY BOOST
OPEC and its partners next meet formally on June 22 but a ministerial monitoring panel will gather in Jeddah, Saudi Arabia, on Friday and are expected to make noises about the broader supply and demand in the oil market.
Resource stocks were the big winners from Thursday's romp higher in prices. Chinese blue chips ended up 1.1 percent and MSCI's broadest index of Asia-Pacific shares outside Japan added 0.9 percent, with energy up more than 2.6 percent.
Japan's Nikkei faded late in the day to end up 0.15 percent, but basic materials and utilities both climbed more than 2 percent.
Industrial and commodities-focused stocks also led the pack in Europe though the pan-regional STOXX 600 showed signs of fatigue after a two-day rally that had taken it to a six-week high.
The bullish sentiment in markets comes amid wider optimism about economic growth. The global economy is expected to expand this year at its fastest pace since 2010, the latest Reuters polls of over 500 economists worldwide suggest, but trade protectionism could quickly slow it down.
Investors were also relieved that no new U.S. demands on trade came out of a summit between Japanese Prime Minister Shinzo Abe and U.S. President Donald Trump.
E-Mini futures for the S&P 500 were pointing to a broadly steady start in New York later where traders were already digesting the latest flurry of earnings including from Blackstone and Philip Morris.
Wall Street had also seen hefty gains in the energy and industrial indexes late on Wednesday, though that was offset by softness in sectors such as consumer staples and financials.
IBM's 7.5 percent drop was the biggest drag on the S&P after the technology company's quarterly profit margins missed Wall Street targets.
DOLLAR DITHERS
In currency markets, the U.S. dollar remained rangebound - its index barely budged at 89.59. It gained a touch on the yen to 107.46 yen, but stayed short of recent peaks at 107.78.
The euro hovered at $1.2373, within striking distance of the week's top of $1.2413, while Turkey's lira shuffled back having had its best day in more than a year on Wednesday after President Tayyip Erdogan declared early elections.
"The conventional wisdom is that (political) stability, even if it is not the form that you might choose, allows investment flows to continue." said Tom Clarke, a cross-asset co-portfolio manager at William Blair Funds.
The strength in commodity prices helped the Australian dollar easily weather unexpectedly soft jobs data, with employment rising by a meagre 4,900 in March.
Figures out from New Zealand had also showed annual inflation there had slowed to just 1.1 percent in the first quarter, underlining expectations that interest rates would remain at record lows for many more months to come.

A soft Swiss franc stayed near the 1.20 to the euro mark it used to be capped at by the country's central bank, while the recently-revitalised pound held its ground despite weak British retail sales data.