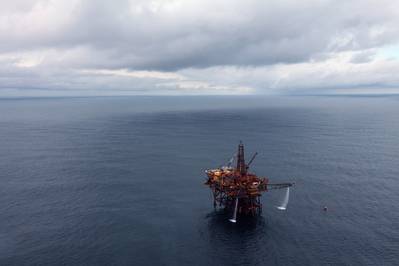 Small and mid-sized independent oil producers in the British North Sea could face a financing squeeze this year as banks cut lending linked to the value of oil reserves, following last year's oil price sell off.
Unlike the oil majors, which can slash headcount and delay projects, smaller firms tend to be reliant on few fields, and those that are mid-project have little choice but to continue with their capital expenditure.
"Where companies have committed to projects when the oil price was $100-plus and their capital budget was set in advance, there's not much they can do to defer expenditure," James Hosie, director, energy research at Barclays Capital, said.
"Retaining access to debt headroom is critical to ensure they have the flexibility to weather the downturn."
But with oil prices tumbling from over $100 in June 2014 to around $60 today, banks are likely to reduce the amount of lending they are willing to make based on the valuation of reserves at the next round of assessments.
"There is a squeeze happening or going to happen," Brian Campbell, oil and gas capital projects director at PWC, said.
"If you've got a lot of reserve-based lending and a lot of debt, and you're already quite drawn on that, you're going to be in a world of pain," said Christopher Wheaton, manager of the Allianz Energy fund.
Whilst banks will not necessarily reduce their lending in line with the fall in the oil price, companies with mature fields, where the reserve base is declining, could find themselves with a liquidity issue.
"The banks will make sure they have a big cushion because they are worried about a field actually delivering and the oil price risk," Wheaton said. If the bank issues a call for cash, the company may have to pay back some of its borrowing fairly quickly, potentially creating problems for those mid-project.
Some producers, such as EnQuest, have already gained some breathing space.
"The lenders have been quite accommodating - they saw the risk of a covenant breach ahead and have extended them some flexibility, which should be sufficient to allow EnQuest to keep investing in its projects," Hosie said.
EnQuest also hedged about 8 million barrels at prices in the high $80s per barrel for 2015, and benefits from a long-dated maturity profile. Its revolving credit facility is due in 2019 and the retail bond and high yield bonds are due in 2022.
Higher Default Risk
But smaller producers focused on fewer fields are at a higher risk of defaulting on bond payments because a problem at one of the fields can have a more material impact on cashflow.
Norwegian Energy Company, known as Noreco, which made a net loss of NOK 1.7 billion in the fourth quarter of 2014, is seeking to convert NOK 1.9 billion of its bond debt to equity, warning that "the present alternative is bankruptcy".
The company suffered a restriction on production from the Huntington field, unplanned shutdowns and field maintenance, meaning it could not service its interest payments.
"For those companies that have pending maturities on bonds, there will be a more acute pressure on liquidity," Hosie said.
"In the E&P sector, the likelihood of refinancing high yield debt is very limited right now - investors in that market have been caught by surprise by the fall in oil prices and a lot of these bonds are trading at quite distressed levels."
Lenders tend to be more willing to restructure or rephase debt payments if they can see new production coming on stream.
As a result, it is more crucial that new projects are completed on time in the current environment, as lenders are supporting the company based on this production ramping up as planned.
If delays mean that companies do get into difficulties, distressed debt and private equity funds are expected to come calling - although the United States will provide more opportunities initially, due to the much higher volumes of high yield bond issuance.
"It's not all doom and gloom - for every pressure point, some will perceive it as an opportunity," Drew Stevenson, UK energy deals leader, at PWC said.
(By Claire Milhench; Editing by William Hardy)
Email