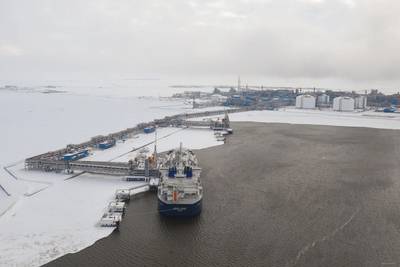 Yamal LNG, controlled by Russia's largest liquefied natural gas (LNG) producer Novatek (NVTK.ME), is resuming ship-to-ship transfers in Norway, Novatek said on Monday, after plans to shift the operations to Russia fell through due to coronavirus.

Novatek suspended transfers in Norway in June last year due to what it termed "pressure from the West".

According to Refinitiv Eikon data, the Arc7 tanker Vladimir Vize is due to arrive at the Norwegian Arctic port of Honningsvag on April 1, carrying a cargo from Yamal LNG.

The data also showed that an empty Arc4 tanker, Yamal Spirit, had departed from the port of Rotterdam last week and is scheduled to arrive at Honningsvag on April 1.

Novatek had planned to start ship-to-ship transfers in the Murmansk region in north-west Russia, but said on Monday that such operations needed foreign specialists, whose travel has been restricted due to the coronavirus pandemic.

"That's why temporary transshipment in Norway's waters is a safer and more reasonable decision," Novatek said in emailed comments.

The group said it had stopped transfer operations in Norway last year due to Western pressure.

By transferring LNG to more conventional tankers in Norway, the Arctic vessels cut in half the distance they would cover to deliver gas to Europe, enabling more frequent shipments from the Novatek terminal and increasing Russia's gas exports.

However, the U.S. State Department has said such operations "undercut Europe's energy diversification efforts" by shoring up its reliance on Russian gas.

Novatek has a 50.1% stake in the Yamal LNG project on the shores of the Yamal peninsular. French energy major Total controls 20%, while Chinese CNPC and Silk Road Fund have 20% and 9.9% respectively.

Russia plans to boost its global LNG market share to up to a fifth from a current 7% by 2035. It is vying for a share of the LNG market with Qatar, United States and Australia.