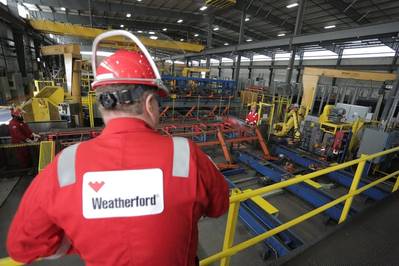 Weatherford International Plc on Friday reported a larger-than-expected fourth-quarter loss on $1.6 billion in charges, casting doubt among Wall Street analysts that the oilfield firm is turning around after years of losses.
The quarterly loss widened from a year earlier, despite a general upturn in demand for oilfield services that has benefited rivals. The weaker results could accelerate planned asset sales to pare its $7.5 billion debt pile.
Weatherford reported a fourth-quarter loss of 33 cents per share, excluding items, exceeding analysts' expectations for a 21 cents per share loss, according to Thomson Reuters I/B/E/S. Revenues for the quarter were $1.49 billion, up 6 percent from the same quarter last year but slightly below Wall Street forecasts.
Shares were off 9 percent at $3.68 in pre-market trade on Friday.
Debt-laden Weatherford has restructured and sold businesses in an effort to raise cash and revamp. The company last year appointed Mark McCollum, formerly chief financial officer for rival Halliburton Co, as its chief executive. In late December Weatherford sold off an U.S. oil well business to Schlumberger (SLB) for $430 million.
"Our fourth quarter results reflect a period of adjustment as we hit the reset button," McCollum said in a conference call. The company expects "significant improvements" in earnings in the first quarter of 2018.
Still, analysts called Weatherford's fourth quarter disappointing.
"These results are bereft of redeeming qualities," investment firm Tudor Pickering Holt wrote in a research note. Researchers from Capital One Securities said "it will likely be hard for investors to believe in the operational improvement story."
Global oil prices have rebounded to three-year highs, prompting a broad uptick in drilling activity and demand for oilfield services and equipment. That helped boost results at rivals Schlumberger and Halliburton last quarter and prompted those firms to offer an optimistic outlook for 2018.
In late January, U.S. crude futures touched a high of $66.66 per barrel, a level not seen since December of 2014.
Charges included some $934 million in asset impairments, $434 million in inventory writedown and a $230 million write-down on its Venezuelan receivables.
Reporting by Liz Hampton
Email