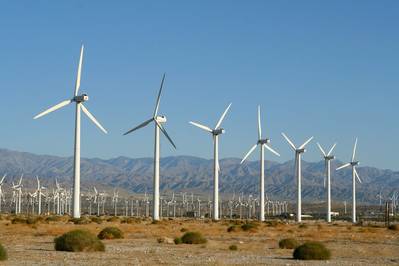 Geared turbines said to be cheaper than direct drive rivals and the wind power industry is facing severe cost pressures.
Vestas is betting on geared wind turbine technology to meet the ambitious profit-margin target it promised when it reported quarterly results on Wednesday.
The world's biggest turbine maker said it targeted a operating profit margin of 9-11 percent in 2018. While this represented a modest decline it was far higher than expected by analysts who forecast about 7-8 percent due to cost pressures in a wind power sector facing a drop in the government subsidies that have cradled it since the early 1990s.
One of the main reasons Vestas expects to hit that goal, two sources close to the Danish company told Reuters, is its exclusive focus on manufacturing turbines that use a gearbox to amplify the energy transmitted from the rotor to the generator, and its rejection of rival direct-drive technology.
This strategy diverges from its major competitors who either manufacture both or focus solely on direct-drive turbines, where the rotor directly drives the generator. They include Siemens Gamesa, General Electric, Xinjiang Goldwind Science and Technology and Enercon.
Each technology has its advantages; direct-drive turbines are more expensive to produce as they require large amounts of raw materials, including copper, steel, and rare earths, but have lower maintenance costs over their lifetimes.
No turbine maker publicly discloses its prices, but three sources at top industry players told Reuters that selling prices of direct-drive turbines are, in some instances, more than 10 percent higher than those of geared turbines.
Two of the sources said that Vestas' business model was more resilient in the face of the cost pressures squeezing wind farm developers and their turbine suppliers.
Last year, auction systems to award farm contracts were introduced which involved lower government handouts and favoured the lowest bidders.
Asked about Vestas's focus on geared turbines, CEO Anders Runevad told Reuters: "I wouldn't say it's religion, but we have no reason to change the strategic way that we have taken, which is about gearboxes."
He did not elaborate further.
RISKS
However there are also clear risks in Vestas's strategy of shunning a direct-drive technology that has been steadily growing in popularity.
Direct-drive turbines raised their share in the global market to 27 percent in 2017, up from just a fifth in 2010, according to consultancy MAKE. This is expected to rise to about a third in 2021, according to research firm GlobalData.
The weakness of geared turbines, according to Navigant Research, is that their gearboxes need to be replaced every 7-10 years, incurring costs of $300,000-400,000 each time - around a tenth of the costs of the turbine itself. The lifespan of a wind farm is at least 20 years.
A spokeswoman for Xinjiang Goldwind, which exclusively makes direct-drive turbines, said the technology had a competitive advantage over geared rivals because of factors including reliability and the elimination of over 1,000 components in the transmission systems needed by gearbox turbines.
Of the top five global players, Vestas has a 15.5 percent market share; Spanish-listed Siemens Gamesa 13.9; U.S. firm General Electric 12.7; China's Xinjiang Goldwind 11.4; and Germany's Enercon 5.9 pct, according to MAKE. Vestas is the only one to focus exclusively on geared turbines.
Danny van Doesburg, senior portfolio manager at APG Asset Management, the seventh-largest shareholder in Vestas, said the company's focus on one type of turbine had allowed it to achieve better economies of scale in its supply chain than some rivals.
"It's a leverage play for Vestas. Size does matter when it comes to the supply chain," he said.
This helped the group slash production costs by 12 percent last year to 0.71 million euros ($0.87 million) per megawatt of produced and shipped turbine capacity, according to figures in its annual report out on Wednesday.
Siemens Gamesa, which makes direct-drive and gearbox turbines, is targeting a profit margin of 6-7 percent for 2017/2018. Direct-drive turbines account for a "high-single-digit" percentage of its volume sales, a spokesman said.
The company, which does not disclose production costs, said in November said it would focus solely on gearbox-based turbines in its onshore business and restrict the use of direct-drive to the offshore sector.
The spokesman told Reuters that this was a direct response to the fact that direct-drive turbines are more expensive to build than geared turbines.

Supply chain issues have been blamed by investors for Siemens Gamesa's faltering performance in the United States, the world's No.2 turbine market after China.