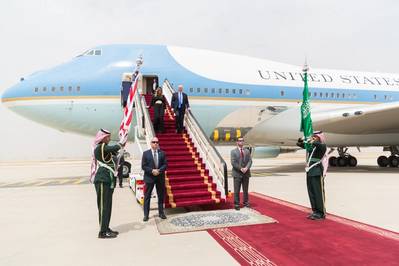 U.S. President Donald Trump and the Saudi government have closely aligned views on most issues but they disagree significantly on the desirable level for oil prices, which could become a source of volatility in 2019/2020.

In keeping with his iconoclastic approach to governing, Trump has kept up a public commentary on oil prices and the role of Saudi-led OPEC in messages on Twitter (TWTR) as well as television interviews.

So far in 2018/19, the president’s interventions have revealed his preference for a benchmark oil price below $70 per barrel (using front-month Brent futures as a benchmark).

He has normally restricted himself to generalized criticism of the Organization of the Petroleum Exporting Countries (OPEC) when prices have been below $75 per barrel.

However, when prices have moved above that level, Trump has sharpened his criticism, singling out Saudi Arabia and other Gulf states, and noting that they benefit from an expensive U.S. security umbrella.

The United States is increasingly both a major producer and consumer of petroleum, so the main impact of changing prices is no longer felt through the external balance of payments but the internal distribution of income.

Rising prices transfer income from consumers, motorists and the industrial Midwest to oil drillers and producing states such as Texas, Oklahoma, North Dakota and Alaska.

The president calculates, correctly, that the marginal voter in his electoral coalition in 2016 and likely again in 2020 is a motorist in the Midwest rather than a driller in Texas.

He risks losing more voters from a rise in prices than he does from a fall, which explains why his messaging on Twitter has focused on the benefits from lower prices.

Recent presidential comments have also revealed a preoccupation with the fragility of the economy as the global expansion slows, and modestly lower oil prices would, on balance, support continued growth.

Saudi revenue
In contrast, Saudi Arabia needs prices above $70 and perhaps over $80 to shore up its government finances, pay for an expensive economic transformation, and stem the deterioration in its own balance of payments.

Saudi Arabia's total foreign reserve assets were unchanged at the end of 2018 from the end of 2017, around $497 billion, according to the kingdom's monetary authority.

The kingdom needs to maintain a large cushion of liquid reserve assets to maintain confidence and avoid a run on its currency, which is pegged to the dollar, and cannot afford reserves to fall too far.

However, the stabilization of reserve assets in 2018 masks a deterioration in the final three months of the year that extended into 2019.

But the renewed fall in oil prices coupled with increased government spending and a relaxation of some austerity measures caused reserves to fall again by almost $23 billion between September and the end of February.

By the end of February, total reserve assets had fallen back to $484.6 billion, their lowest since April 2011 (“Monthly statistical bulletin”, Saudi Arabian Monetary Authority, March 2019).

Saudi Arabia still has significant unused credit capacity: external debt is low, and the kingdom has the ability to sell state-owned assets or borrow against the future revenue of national oil producer Saudi Aramco.

Asset sales and borrowing can smooth the transition and provide more time for adjustment, but the kingdom's budget and external positions are not sustainable in the long term at oil prices below $70.

Clashing goals
There is a direct contradiction between the president’s electoral strategy, which assumes prices below $70, and Saudi Arabia’s economic and political strategy, which needs prices well above $70.

This will create a persistent tension, at least until the next U.S. presidential election in November 2020, though both sides have a strong incentive to try to contain the friction to cooperate in other areas.

Saudi Arabia needs Trump’s support to pursue its war in Yemen and more broadly to isolate its regional rival Iran.

In turn, the president needs Saudi support to contain Iran and pursue a settlement of the dispute between Israel and the Palestinians.

Fundamentally, however, the relationship is an unequal one, and the White House expects Saudi Arabia to manage the oil market to ensure that oil prices do not rise too much.

In particular, the White House expects Saudi Arabia to increase its own output to offset any shortfall from Iran and Venezuela because of U.S. sanctions policies and will exert pressure on Riyadh to ensure it falls into line.

For the time being, the tensions can be managed with some deft diplomacy, but they will get fiercer if prices climb above $75, the United States tightens sanctions on Iran significantly, or the global economy slows further.