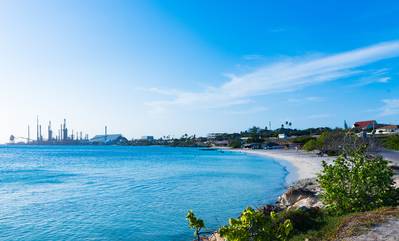 Citgo Petroleum Corp has removed at least three top executives close to Venezuelan President Nicolas Maduro, people familiar with the matter said on Monday, in a move to cement management control under a new board of directors.

The U.S. refining arm of Venezuelan state-run oil company PDVSA has been thrust in recent weeks into the center of a political battle between an opposition leader and self-declared president backed by many Western nations, including the United States, and Maduro, a socialist whose re-election last year they consider illegitimate.

Monday's departures appeared to shift control of Citgo's day-to-day operations to officials expected to recognize a new board of directors appointed last week by the opposition-controlled congress, led by self-proclaimed president Juan Guaido.

Citgo Vice Presidents Frank Gygax, Nepmar Escalona and Simon Suarez, all of them Venezuelans promoted by Citgo Chief Executive Asdrubal Chavez from 2017 to 2018, were escorted out of Citgo's Houston headquarters on Monday by human resources staff, the people said.

It was not immediately clear if the executives were fired, forced to resign or if they retired.

Chavez, a cousin of late Venezuelan leader Hugo Chavez, has been running Citgo from the Bahamas since last year as the U.S. government denied his visa petition to work from Houston. Other Venezuelan members of the oil refiner's board are also working with him from the Caribbean office.

Citgo is the eighth-largest U.S. refiner and runs plants in Illinois, Texas and Louisiana that provide about 4 percent of U.S. refining capacity. It also operates fuel pipelines and terminals, and supplies fuel to a retail network of 5,500 gas station across 29 U.S. states.

The company has been hurt by U.S. sanctions imposed on Jan. 28 to curtail Maduro's access to oil revenue. Citgo, the largest U.S. buyer of Venezuelan crude, can continue importing PDVSA's oil only if the sale proceeds go to banks accounts controlled by Guaido.

Citgo's new board of directors is led by Venezuelan Luisa Palacios, four veteran oil executives and current Vice President of Strategy and Compliance Rick Esser. The new members have yet to take office in Houston.

A fourth top Citgo official, General Auditor Eladio Perez, also was removed from his office on Monday, according to one of the people.

Citgo's manager for corporate social responsibility and legislative affairs, Larry Elizondo, declined to comment on Monday, saying he was not authorized to speak publicly on the matter. A Citgo spokeswoman did not respond to requests for comment.

Escalona, Suarez and Perez could not be immediately reached for comment. An assistant for Gygax said she was unaware of the decision.

Earlier on Monday, a Citgo unit on the Caribbean island of Aruba, said a project to refurbish and reopen a 209,000-barrel-per-day idled refinery rented by the company since 2016 was put on hold and remaining employees would be laid off by Feb. 27 because of sanctions.