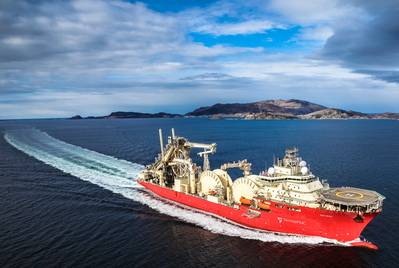 Franco-American oil services company TechnipFMC received a record volume of orders in the second quarter, pushing its backlog of projects to a peak thanks to new liquefied natural gas projects, it said on Wednesday.

The records could signal a rebound for the company created by a 2016 merger of France's Technip and U.S. rival FMC Technologies (FTI) to weather the oil price crash that had forced their oil major clients to slash budgets and shelve projects.

"We achieved record inbound orders in the quarter, with total company orders reaching $11.2 billion," Doug Pferdehirt, chairman and CEO of TechnipFMC, said in a statement.

Onshore/offshore inbound orders of $8.1 billion was also a new record for the business segment and the total backlog for projects for the company increased more than 75 percent since year-end to $25.8 billion.

Pferdehirt said TechnipFMC was benefiting from the new wave of liquefied natural gas (LNG) projects. The company on Tuesday won a $7.6 billion contract from Russia's Novatek (NVTK.ME) for the Arctic LNG-2 project in western Siberia.

"The LNG market growth continues to be underpinned by the structural shift towards natural gas as an energy transition fuel, helping to meet the increasing demand for energy while lowering greenhouse gases," Pferdehirt said.

TechnipFMC said its subsea division was also seeing strong growth and had won most contracts in the sector, worth around $3 billion, since the start of the year including Anadarko's Golfinho $1 billion development in Mozambique.

"The unprecedented level of order activity demonstrates that we are winning," Pferdehirt said, adding that TechnipFMC's strong second-quarter results and growth in backlog showed the company would achieve its increased full-year guidance.